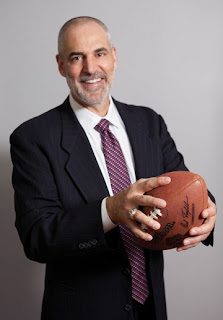 There are plenty of Jews with Super Bowl rings — coaches, executives, even owners. But one that was won by a player? Not quite as common.

Alan Veingrad will talk about his experiences as a Super Bowl champion at the Chabad Jewish Center in Metairie on Aug. 28 at 7:30 p.m. A skinny Jewish kid from Brooklyn, Veingrad was part of the Dallas Cowboys team that won Super Bowl XXVII in January 1993.

He grew up in Miami, then was Lone Star All-Conference playing on the offensive line at East Texas State, which later became Texas A&M-Commerce. Unselected in the 1985 draft, he signed with Tampa Bay but was cut, and also had a tryout with Houston but was released.

While in Green Bay, he was invited to Rosh Hashanah services, which awakened his Judaism. He retired after the Super Bowl win, became observant and now goes by the name Shlomo. Aside from his financial services career, he travels the country talking about his experiences transforming from a secular Jew to observance.

In 2010, he was inducted into the National Jewish Sports Hall of Fame, and is also in the Texas A&M-Commerce Athletic Hall of Fame. He was also invited to the White House for the first-ever reception honoring Jewish American heritage month.

Tickets to the event are $15 before Aug. 25 or $25 at the door. The “Revealing the Diamond Campaign” raffle will also take place at the program.

For event sponsors, there will be a luncheon with Veingrad, which will include time with Veingrad, an autograph session and photo opportunity, and a chance to try on his Super Bowl ring.