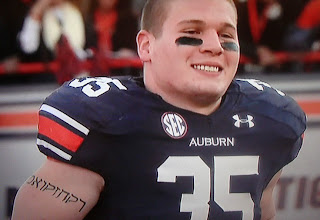 Do not adjust your set — Auburn fullback Jay Prosch is indeed sporting a Hebrew tattoo on his arm.

Prosch, who is playing in the BCS national championship game tonight, is a native of Mobile who originally went to the University of Illinois. In 2012, he got a medical waiver from the NCAA allowing him to transfer to Auburn and play without the usual one-year waiting period.

The waiver was because his mother, Iris, had been diagnosed with stage-4 brain cancer, and his transferring enabled him to be closer to home. She went into a coma the night of his first Auburn game and died two days later, in September 2012.

A couple of weeks later, Prosch had an iris tattooed on his arm in her memory. Also tattooed around his arm next to it is the Hebrew phrase, “Rak Hazak v’ematz.” From Joshua 1:7, it means “only be strong and courageous.” Prosch and his sisters were raised in the Baptist church.

The tattoo also attracted the attention of Michael Oren, former Israeli ambassador to the United States, who posted about it on his Facebook page, wishing him a Mazel Tov for Auburn’s victory “over the legendary Crimson Tide.” He added, “be strong and of courage to you, too, Jay.”

After suffering through both the loss of his mother and a 3-9 season, this year Prosch has not carried the ball but has become a vital part of the team’s blocking scheme, helping Auburn lead the nation in rushing offense.