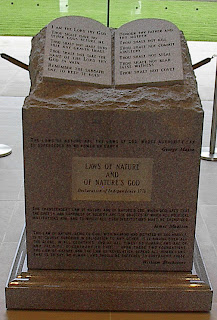 Editor’s Note: A version of this editorial originally appeared in our publication in September 2001, during the Judge Roy Moore monument dispute at the Alabama Supreme Court building. It has been updated slightly to refer to events today. The original piece won the 2001 Simon Rockower Award for Excellence in Jewish Journalism from the American Jewish Press Association, first place in the editorial category. Written by Larry Brook, editor.

The Alabama Legislature is at it again. A decade after Alabama Supreme Court Chief Justice Roy Moore was removed from office for refusing a higher court’s direct order to remove a 5,280 pound monument of the Ten Commandments from the Supreme Court building (above), Alabama’s legislators are determined to tilt at that windmill yet again.

It must be an election year. Bring out your feel-good legislation and flex those religious-majority muscles.

The battle lines are being drawn yet again between good Christians and the evil forces of atheism and secularism that want to… what, exactly?

A closer examination of the Ten Commandments, where they came from and what they mean gives numerous arguments — even ignoring the obvious problem with breaking the separation of church and state.

Here are 10 such problems:

1. What is the First Commandment? According to Christian versions, it is “You shall have no other gods before Me.” But in the original Hebrew, the First Commandment is “I am the Lord your God who brought you out of Egypt.” Even allowing for intermarriage over the last couple millennia, the vast majority of Alabamians can not say their ancestors were slaves to Pharoah in Egypt. Therefore, the Jewish First Commandment is ignored, and the second one is split in half — into two commandments, covering other gods and graven images separately.

Moore’s monument of a decade ago listed the first phrase of the First Commandment, then listed both halves of the Second Commandment — giving him 11 Commandments on the monument.

2. Define “other gods.” According to Judaism, God is an infinite, indivisible entity that cannot be defined or limited in any way. God has no human form. In Christianity, there is a very distinct idea of God — the trinitarian form, of the Father, the Son and the Holy Spirit. The Son, named Jesus, is regarded as God “in the flesh,” in human form. To Judaism, the notion of a human regarded as God is anathema. One could even say such a philosophy violates the prohibition against “other gods,” according to Jewish interpretations.

3. Bug off, Uncle Sam. Where in the Alabama Code is faith in God mandated? And of such faith, where is it written what form of deity should be worshiped? Is it against state law to be an atheist? To believe that Elvis Presley was God?

By now, we have covered the first three Commandments. We have yet to find one that has any relevance to the Alabama Code.

One may argue that our Founding Fathers felt human rights were inalienable because they are God-given, not granted by government or by man. True, they did hold that philosophy, and it is a philosophy that should hold government in check. It belongs to national history and, even with the separation of church and state, must be understood. But the law itself is of this world. A judge should be concerned with what is in the law books, and the legislators should concern themselves with the earthly affairs of state. That is their job.

4. Remember when? The Fourth Commandment is about the Sabbath. Again, this is an area where the state has little to say. “Blue laws” closing businesses on Sunday are a thing of the past — the only remaining restrictions are on alcohol sales on Sundays.

But remember, the Sabbath originally was sundown Friday to sundown Saturday. It is a time when there is supposed to be no commerce, no work. Any bets on the chances of legislation being passed to cover that? Especially during college football season?

The Sabbath Day was also given by God as “an eternal sign between Me and the children of Israel,” a sign of the eternal nature of God’s covenant with the Jewish people. Interesting, then, that the only people who observe the original Sabbath day is the Jewish people. Christians, aside from a few small offshoots, observe Sunday. Muslims observe Friday.

Shall Alabamians “remember” the Sabbath day? It could be seen as evidence that we Jews are not damned, that our covenant with God endures, and that our souls need not be “saved” by well-intentioned missionaries. That will happen about the same time Dreamland opens a glatt-kosher location.

5. Their honor: Honoring one’s parents is something to strive for. However, it too is none of the state’s business. Where does the state mandate conduct toward one’s parents?

6. So much for the military. The Sixth Commandment prohibits killing. However, the original Hebrew word is for murder, not for all killing. One is justified in killing an attacker. If all killing is against the Ten Commandments, we’d better dismantle the military right now. Again, the likelihood of Alabamians going for that…

7. What do you want? Taking the literal words to another commandment… one should not covet. That is a major problem, because coveting is the whole foundation of capitalism. The old phrase “keeping up with the Joneses” comes directly from that.

That commandment, though, is interpreted as a prohibiting the type of desire that would cause one to break laws in order to gain what one desires. It’s perfectly fine to desire your neighbor’s new car, quite another to steal it.

Further, coveting by itself could be construed as a thought. Many of those on the end of the political spectrum who applaud Judge Moore and the state legislators also are against hate crimes legislation. Such legislation calls for added penalties for actions that came forth because of thought. Punish the action, not the thoughts, the argument goes. If the state gets into the business of policing coveting, it is doing the same thing.

8. Graven images. What is the political display of the Ten Commandments itself if not a graven image, especially Moore’s monument? The two tablets have become a larger than life symbol, one seemingly infused with mystical power. Its absence is blamed for the downfall of American schools. The hand-carved plaque Moore hung in the years before the monument was deemed so important nothing short of an action by the National Guard could cause Moore to remove it.

A cult of worship seems to be growing around the Ten Commandments — and a significant percentage of those passionately behind this couldn’t list all 10.

9. Curse of the law. The passion behind the Ten Commandments is even more puzzling because of Christian theology. The “Old Testament” law, of which the Ten Commandments is central, is seen by Christianity as a curse. It is so difficult to follow to the letter that no one could possibly get it right, according to Christianity. Jesus came to free the world of that law — that curse.

Further, nobody can get to the eternal reward through that law — all one’s works are nothing. Faith is what matters.

Of course, Judaism holds that the Law is God’s greatest gift, not a curse, and that nowhere is it stated that everything must be followed to the literal letter. The Oral Law — which Christianity rejects as a rabbinic invention — explains the law as it applies to daily life. To Jews, following that law — even when we fall short — is the way to have a relationship with God.

God knows we are imperfect. He would not give us a strict law and expect that we would never violate it. That is why there is t’shuvah, returning to the proper path.

In rejecting the Law, Christianity misreads the Jewish view of God. In that is a fundamental difference in the way the Law — including the Ten Commandments — is regarded.

Furthermore, according to Judaism, all non-Jews are expected to follow only seven laws — the Seven Noahide Laws given to all humanity after the Flood. Aspects of the Ten Commandments come from the Noahide Laws. But those laws are found in just about all civilizations on the planet.

10. Judeo-Christian what? And so, we reach the bottom line. Displaying the Ten Commandments is a tribute to our “Judeo-Christian” heritage.

But it glosses over very real differences in philosophy. Christians believe man is born evil and condemned to sin. Judaism believes we are born neutral, and if we choose sin, we can also choose to repent and return to the proper path — and God will welcome us back, if we are sincere.

Christianity holds that there is a constant struggle between good and evil — that Satan and God are locked in a battle for the world. Judaism sees no such dichotomy — nobody challenges the authority and position of God. Where Satan appears in Judaism, it is as a messenger, a servant of God, never doing anything that God does not allow. That is a far cry from the Armageddon taught by Christianity.

Christians believe man is so sinful, he can’t approach God without an intermediary — Jesus. Judaism states anyone can approach God. All that is required is a humble heart and a desire to follow God’s expectations.

The Ten Commandments contain important precepts. They are an important religious document. Sadly, they are being turned into a symbol unto themselves, a political football.

The Ten Commandments are nothing more than a quick fix, an attempt to make people think we as a society are tackling our problems.

Hanging a poster at the State House, hauling a monument into the court building or posting them in a school building does nothing to accomplish that.