TribeFest takes to the streets of New Orleans 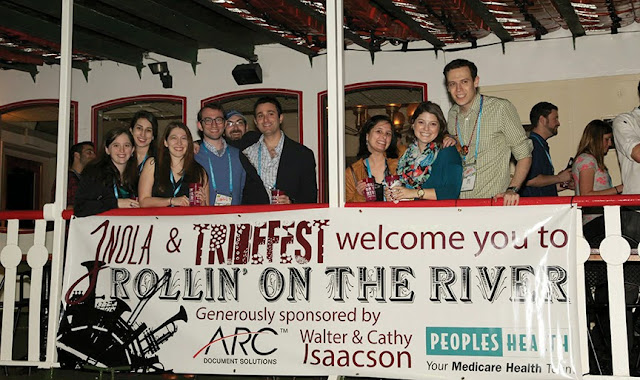 On March 16, the Elysian Brass Band led a second-line procession of about 1,300 Jewish young adults from across the country through the streets of New Orleans, from the Sheraton Hotel to the Steamboat Natchez for a late-night party featuring the Soul Doctors.

The third incarnation of TribeFest brought Jewish leaders aged 22 to 45 together for three days of learning and discussions of how to increase involvement in the Jewish community.

The re-imagining of the Jewish Federations of North America’s former young leadership biennial, TribeFest was primarily held at the Sheraton New Orleans. The first two TribeFests were held in 2011 and 2012, in Las Vegas.

In pushing for the third TribeFest to be held in New Orleans, Jewish Federation of Greater New Orleans Executive Director Michael Weil had experiences like that parade in mind — along with the opportunity for those in attendance to get out into the city and make a difference through social action projects.

The March 16 to 18 event included seminars, discussions, social activities, best-practices learning and was a way for the host city to showcase the wonder that is New Orleans.

“This is such a great opportunity to engage current and future Jewish leaders. You are around your peers, learning and having a great time,” said Elliot Corenblum, who is involved in the Baltimore Jewish community but is originally from Birmingham.

Though Corenblum had been to New Orleans before, several mentioned that it was their first time visiting the city. For Anna Bern, who was in just her first days as executive director of the Jewish Federation of Central Alabama, it was a first-time visit to New Orleans.

She said “the most valuable resource is the people you can get to know” at such an event, and the opportunity to network with so many young Jewish professionals was incredible.

TribeFest co-chair David Kline of Austin said “TribeFest is the pinnacle for outreach and engagement to young Jews that want to get involved with the Jewish community. It’s a jumping-off point for young leaders to get active and to grow in the Jewish community locally, nationally and internationally.”

A delegation from Los Angeles came in early March 15 Saturday to enjoy the Irish Channel Saint Patrick’s Parade in Uptown then a pre-TribeFest Black and White Purim Ball at the Sheraton that night.

Those who arrived even earlier were treated to a meal of kosher gumbo after Shabbat evening services at Anshe Sfard on March 14.

TribeFest kicked off on March 16 with “The Big Show,” which in other venues might be referred to as the opening plenary. Guest speakers included “Rugrats” and “Smurfs” writer David Weiss, “Book of Mormon” actor Ben Platt and actor Josh Malina of “The West Wing” and “Sports Night.”

Local co-chairs Hallie Timm and Sam Cohen, and JNOLA chairs Ashley Merlin and Austin Marks were recognized for their efforts in making the event possible. JNOLA is the Jewish young adult umbrella group in New Orleans, and their members were also invited to the March 16 party at the Steamboat Natchez.

Greg Liberman of JDate, encouraged TribeFest participants to take control of their Jewish life. “Each generation needs to find contemporary relevance in our ancient legacy,” he said. JDate, along with Pfizer, co-sponsored TribeFest.

National Young Leadership co-chairs Alison Lebovitz of Chattanooga, a Birmingham native, and Robb Lippitt of Detroit were also involved in the planning.

At the opening, they echoed Liberman’s sentiments when reminding TribeFest participants, “you are not part of the next generation. Your time is now.”

After the Big Show, there were numerous “mashups,” similar to breakout sessions. The sessions were on a wide range of topics, in the tracks of justice and inclusion, faith and culture, Jewish life, innovation, leadership development and “hot topics.”

One of the March 16 sessions focused on ideas for being a model of Jewish community involvement and how young leaders can encourage more participation from the “millennials.”

Leading the discussion were community leaders from Los Angeles, Detroit and Boston. But questions were asked and ideas were given by those from smaller Jewish communities such as Lexington, Ky., and Santa Barbara, Calif.

“If you want to push for change you have to be the change your community needs,” said Jay Sanderson, director of the Los Angeles Jewish Federation. “If you want to engage today, you need to do it in a different way.”

According to a few that spoke, today’s younger adults still want to contribute to fundraising efforts, become affiliated with a synagogue and be a part of or lead events in their Jewish communities. But today’s generation of younger adults engage in different ways than previous generations and seek new opportunities to participate.

“It is important to be on the pulse of what interests those of our generation,” said Miryam Rosenzweig, a Jewish community leader in Detroit. “Especially here, we’ve been hit by the economy and donations have gone down. But our involvement from younger adults is increasing and that is what will continue to lead this progression forward.”

On March 17, TribeFest delegates split into several groups and did social service projects throughout New Orleans, then held another afternoon of sessions and discussions.

InterfaithFamily and the Hebrew Immigrant Aid Society co-led a session on how the Jewish community can be more welcoming and inclusive.

Many organizations beyond the Federation used TribeFest as an outreach opportunity. The Einstein Victor Center for the Prevention of Jewish Genetic Diseases set up a genetic screening station.

Malkie Schwartz, director of community engagement for the Institute of Southern Jewish Life in Jackson, led a session on “Unpacking the Jewish Privilege Backpack,” highlighting disparities in Jewish life and how positive Jewish experiences can be made possible for more people.

Emma Samuels of Boston, who co-chaired TribeFest, said she feels “so blessed and honored to have had the opportunity to help bring together almost 1,300 young adult Jews to New Orleans.”

“TribeFest participants came from 85 different communities, and with diverse backgrounds. They were engaged in deep conversations and committed to wanting to make a difference,” said JFNA CEO Jerry Silverman. “I am excited to see how these young leaders will engage in Jewish life and in their Federations in the years to come.”

While there were many serious discussions and weighty topics at TribeFest, enabling everyone to have fun was a main priority. As a Los Angeles couple remarked, “This is our first time in New Orleans and we get to be in a parade! This city is like none other. What a great place.”