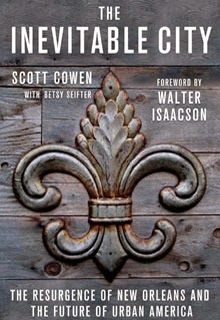 On the day the Scott Cowen’s book, “The Inevitable City: The Resurgence of New Orleans and the Future of Urban America” is released, he will be at the Uptown Jewish Community Center for a launch party.

A book signing and dessert reception will follow the 7 p.m. event on June 10. Cowen will share his perspectives on leadership, Hurricane Katrina, Tulane University and the rebirth of New Orleans. The event is free and open to the community.

The book details the challenges faced after the levees broke following Hurricane Katrina in 2005, and chronicles the rebirth of New Orleans, which he says is an inspiring example of urban renewal and revitalization.

“I believe it was my obligation to give a voice to the civic leaders and community members who brought about positive change in the face of crisis,” he said. “The resilience and creativity of the New Orleans community post-Katrina was remarkable.”

The book presents 10 principles that changed the city’s trajectory as a coalition of civic, business and non-profit leaders worked around the old institutions to bring about change.

The book is being released nationally on June 10, though there was a preview held at Tulane on May 15.