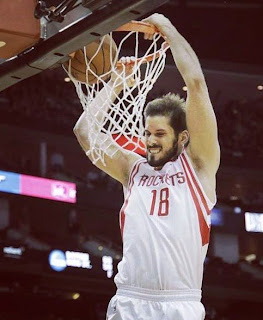 Small forward Omri Casspi, who signed a two-year contract with the Houston Rockets last summer, is heading across Interstate 10 to New Orleans, where he will fill a need in that position.

In a move that was confirmed last night, he was traded to the New Orleans Pelicans in what is being seen as a surprise move. Houston coach Kevin McHale said he was caught by surprise.

The first Israeli-born player in the National Basketball Association, Casspi was traded to New Orleans in a three-team deal. Turkish center Omer Asik also goes to New Orleans, and the Pelicans will receive $1.5 million.

The three teams have signed papers for the trades, but the league has to give final approval.

Casspi, who is 6-foot-9, began his career with the Sacramento Kings and averaged 10.6 points per game. After two years in Sacramento he signed with Cleveland, where he played for two years.

Last year, his only season in Houston, he had 6.9 points per game with 3.7 rebounds and 1.2 assists. He did not play in the first round of the playoffs, where Houston lost to the Portland Trailblazers.

In Houston, Casspi was active with the Jewish community, speaking at Jewish schools and working with the Israeli Consulate there to have an “Israel Night with the Houston Rockets” in January.

When he arrived in Houston last fall, he told the Jewish Herald-Voice that “When our public relations asked what kind of community service I wanted to do, the first thing I said was I wanted to go the Jewish schools,” Casspi said. “These kids are really awesome.

Casspi is expected to rejoin Israel’s national team for next month’s EuroBasket qualifiers. Matches against Montenegro, Bulgaria and the Netherlands are scheduled for mid-August.