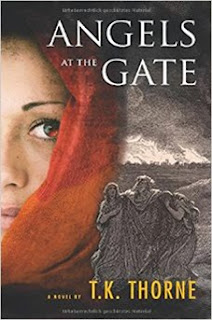 When Lot and his family flee from the destruction of Sodom and Gomorrah, his unnamed wife is turned into a pillar of salt for looking back at the destruction.

Birmingham author T.K. Thorne not only gives her a name, but an entire backstory as the central character in her new novel, “Angels at the Gate,” which comes out this month.

A book launch is scheduled for March 5 at the Harbert Center in Birmingham from 4:30 to 7 p.m., with remarks at 6 p.m. She will return to her native Montgomery on April 9 for a 7 p.m. talk at Temple Beth Or.

Her debut novel, “Noah’s Wife,” received an award as Book of the Year for Historical Fiction. A short film from her screenplay “Six Blocks Wide” was a finalist in a film festival in Italy and has shown at other juried festivals in the U.S. and Europe.

Her more recent book was the non-fiction “Last Chance for Justice: How Investigators Uncovered New Evidence Convicting the Birmingham Church Bombers,” about the Sixteenth Street Baptist Church bombing in 1963.

Thorne said “Angels at the Gate” began with “Noah’s Wife.” She hadn’t thought about writing stories of Biblical women, but “she deserved more” than one brief unnamed mention in the Bible.

After “Noah’s Wife” received critical acclaim, she thought her Biblical career was behind her, until a co-worker joked “what’s next, Lot’s wife?”

Though her initial reaction was that Lot was the hero in the story and the whole episode was too dark for her, one question intrigued her. In “Noah’s Wife,” she did a lot of scientific and historical research to make the story more realistic. In the story of Lot, there were angels — how do you explain that rationally?

After a year of research, she started to write “my midrash, my commentary — my imagination layered on a foundation of archaeology, historical theories and ancient writings.” She realized that while she had a lot of information about the period, she knew nothing about the main character. Finally, she started typing about Adira, whose mother died in childbirth and who was raised in her father’s caravan as a boy.

“Adira means ‘strength’ in Hebrew and I liked that the masculine form was Adir,” Thorne said.

Adira rejects her looming changes into womanhood as a threat to her nomadic life and independence. Then two mysterious strangers arrive — Northmen who are said to be holy, perhaps “angels.”

After raiders invaded the caravan, she loses everything — her father, her freedom and the “angels.” Torn between an impossible love and her oath to return to her tribe and live the “proper life for a woman,” she sets out on a quest for revenge and to find her “angel.”

Thorne is a retired Birmingham Police captain and now is executive director of CAP: City Action Partnership, which works with businesses, residents and the police and has reduced crime in the central city by almost two-thirds since 1995. She is said to be the first Jewish police officer in Birmingham.

Thorne will also speak to the Baldwin County Writers Group in Daphne on March 21 at 10 a.m., sign books at Little Professor in Birmingham on March 25 at 4 p.m., and at Page and Palette in Fairhope on April 10.