Commemorating the Holocaust in the Deep South 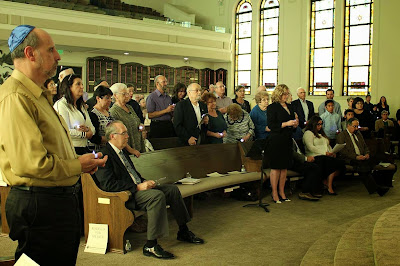 Communities across the South will mark the 70th anniversary of liberation as part of this year’s Holocaust Remembrance Day. With the number of survivors in the region dwindling, emphasis is now shifting to second- and third-generation family members telling their stories.

Alabama’s state commemoration will be at the Old House Chamber at the State Capitol in Montgomery on April 14 at 11 a.m. Sponsored by the Alabama Holocaust Commission, the program will feature keynote speaker Rabbi Scott Kramer of Agudath Israel-Etz Ahayem in Montgomery.

The program is open to the public. A luncheon follows, with reservations to the Birmingham Holocaust Education Center required. Cost for the luncheon is $18.

The Alpha Epsilon Pi Theta Colony at Auburn University will have a silent walk of remembrance on April 16, starting at 12:15 p.m. at the Shelby Center Terrace. Participants are asked to wear black to show support.

The Birmingham community commemoration will be on April 12 at 3 p.m. at Temple Beth-El. The program will be “Stories Remembered and Retold,” the stories of deceased Holocaust survivors as told by their local descendants.

The University of Alabama at Birmingham Multicultural Council and Hillel are hosting a “passive program” on the green on April 14 from 9 a.m. to 5 p.m. to honor those killed in the Holocaust.

Dothan’s Temple Emanu-El will have a Holocaust memorial as part of Shabbat services on April 17 at 7 p.m.

Huntsville’s commemoration will be presented by the Jewish Federation of Huntsville and North Alabama on April 19 at 2 p.m., at the University of Alabama at Huntsville’s Chan Auditorium. The Curtain and Lights Theater Company of Decatur will present “The Diary of Anne Frank” with a brief introduction and a memorial program following the play. The event is free and open to the community.

Jacksonville State University will have its annual commemoration on April 14 at 7:30 p.m. Holocaust survivor Robert May will be guest speaker, accompanied by daughter Ann Mollengarden.

Mobile’s Yom HaShoah program will be on April 15 at 7 p.m. at Ahavas Chesed, remembering the liberation of Auschwitz 70 years ago. Artwork, prose and poetry from local students will be featured. The service is sponsored by the Gulf Coast Center for Holocaust and Human Rights Education, Mobile Christian-Jewish Dialogue and Congregation Ahavas Chesed.

Auburn University at Montgomery will have its annual Holocaust remembrance program at the AUM Athletic Complex on April 15 at 9:30 a.m. Max Steinmetz and Max Herzel, survivors living in Birmingham, will be the featured speakers.

Temple B’nai Israel in Panama City will have a Yom HaShoah service, “The Third Seder,” on April 16 at 6 p.m. The Third Seder commemorates the liberation from the Holocaust with a four cups ritual, six yellow candles and six yellow tulips. A “flame of hope” will be passed around lighting everyone’s candle, then the six memorial candles will be lit. The commemoration is open to the community.

The Naval Support Activity Panama City’s Day of Remembrance will be April 14 at 10 a.m. at the NSA PC Log Glass Conference Room, Building 308. Advance arrangements for base access is needed by April 10.

Pensacola’s Yom HaShoah commemoration will be on April 15 at 5:30 p.m. at the Martin Luther King Plaza downtown.

B’nai Israel in Pensacola will host “The Legacy of the Holocaust in Poland” with Institute of Southern Jewish Life Education Fellow Allison Poirier on April 18. There will be a discussion of how Polish Jewry was affected by the Holocaust, and the growth of Jewish life in Poland today. Mincha will be at 6:30 p.m., followed by the program at 7 p.m. and Havdalah afterwards.

In Columbus, Ga., Shearith Israel will host a program with guest speaker Murray Lynn. He will introduce and discuss a film about his survival of the death camps. Produced by the Breman Museum, the film is narrated by Ambassador Andrew Young. Rabbi Brian Glusman will lead the 7 p.m. program on April 15.

In Alexandria, the interfaith commemoration will begin at the downtown Holocaust monument on April 20 at 6 p.m., and proceed to Emmanuel Baptist Church for a 7 p.m. program.

In Baton Rouge, the Jewish Federation of Greater Baton Rouge and The Advocate Educational Services Department sponsor the memorial program, which will be April 19 at 4 p.m. at B’nai Israel.

The Lake Charles commemoration will feature Pierre Sauvage and have programs at both McNeese State and Temple Sinai.

Sauvage is a child survivor and son of Holocaust survivors. A documentary filmmaker, he is founder of the Chambon Foundation, the first educational foundation dedicated to “exploring and communicating the necessary and challenging lessons of hope intertwined with the Holocaust’s unavoidable lessons of despair.”

The Varian Fry Institute was established by the Foundation in 2005.

Sauvage is best known for his 1989 film, “Weapons of the Spirit,” about an isolated community in France that took in and saved 5,000 Jews, including his family. In 2014 he released “Not Idly By — Peter Bergson, America and the Holocaust.”

“Weapons of the Spirit” will be screened at Bulber Auditorium on April 15 at 7 p.m.

The city-wide Day of Remembrance commemoration will be at Bulber Auditorium on April 16 at 7 p.m. After a brief ceremony, Sauvage will speak about his work.

On April 17 at 7 p.m., there will be a personal discussion with a question and answer session at Temple Sinai.

Monroe’s Temple B’nai Israel is doing its first-ever Holocaust essay and poem contest with local high schools. The staff of the News Star will judge the submissions. The commemoration will be on April 19 at 2:30 p.m.

The Northshore Jewish Congregation in Mandeville will have a Holocaust remembrance program on April 16 at 7 p.m., featuring survivor Judith Roheim of Baton Rouge.

Alexandra Zapruder, author of “Salvaged Pages: Young Writers’ Diaries of the Holocaust,” will be the featured speaker for the community-wide Holocaust Memorial Program in New Orleans.

The program, held at the Uptown Jewish Community Center on April 12 at 7 p.m. will remember and honor local survivors while educating the public about the Holocaust.

A founding staff member at the United States Holocaust Museum in Washington, Zapruder was one of the curators for “Remember the Children: Daniel’s Story,” the Museum’s primary exhibition for young visitors. Her book, “Salvaged Pages: Young Writers’ Diaries of the Holocaust,” won the Jewish Book Council’s National Jewish Book Award in the Holocaust category.

In conjunction with Zapruder’s talk, the Holocaust Educator of the Year award will be presented to Caitlin Meehan-Draper, a teacher at Samuel L. Green Elementary, and students from the Donald R. Mintz Youth Leadership Mission of the Anti Defamation League will be recognized. The program is free and open to the community.

Gates of Prayer in Metairie will have a Holocaust memorial service on April 15 at 6:15 p.m., led by the congregation’s teens.

Touro Synagogue in New Orleans will have a program on the Voices of Spiritual Resistance in Terezin, a musical exploration of cultural life in the Theresienstadt ghetto. Led by Cantor David Mintz, it will follow the 6 p.m. Shabbat service on April 17.

The annual Shreveport commemoration rotates among several houses of worship, and this year’s 32nd annual event will be at St. Mark’s Cathedral on April 19 at 3 p.m. The Very Rev. Alston Johnson, dean at the cathedral, is chairing the service.

Nico Van Thyn, son of Holocaust survivors Rose and Louis Van Thyn, who lived in Shreveport, will share stories about what it means to be the child of survivors.

The winning entries from a middle and high school Holocaust literature contest will be read. Over 100 essays and poems were submitted on the topic of Gordon Allport’s stages of prejudice, mentioning an event from the Holocaust and a contemporary example of that stage.

The service will include the lighting of 11 memorial candles for the 11 million lost during the Holocaust. The St. Marks choral groups will present musical selections.

On April 13, Centenary College in Shreveport will hold a Van Thyn Lecture, “The Gender of Genocide: Women, Men and the Holocaust” with Pascale Bos, Associate Professor of Germanic Studies and affiliated faculty in the Comparative Literature, Women’s and Gender Studies, Center for Russian, East European and Eurasian Studies and Jewish Studies Programs at the University of Texas at Austin. The 7 p.m. talk will be in the Whited Room at Bynum Commons.

The Gulfport Jewish community will host a Yom HaShoah program on April 16 at Beth Israel, starting at 6:30 p.m. “Unto Every Person There Is A Name” will fature speaker Joseph Metz, a student at Mississippi State University who is the grandson of Gilbert Metz, a Holocaust survivor who lived in Mississippi.

At Jackson’s Beth Israel, Roger Grunwald will present the one-person play “The Mitzvah Project” on April 18 at 7 p.m. The play explores “one of the most astonishing stories of the Second World War,” the tens of thousands of German men known as “mischlings,” a derogatory term for men who were assimilated or converted but had one or two Jewish grandparents, but still served in Hitler’s army. The story is told through the experiences of Christoph Rosenberg. After the play, Grunwald will lead a discussion. The event is free and open to the community, and is presented in cooperation with the Goldring/Woldenberg Institute of Southern Jewish Life.