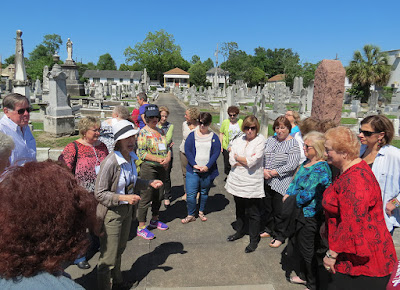 Julie Schwartz leads attendees to a tri-region Hadassah conference in New Orleans on a Jewish heritage tour of the city in April.

In a reader survey last year, Travel + Leisure Magazine rated New Orleans one of the world’s top 10 cities to visit. Not surprisingly, there is a large number of Jewish tourists who make their way to the area.

In 2014, New Orleans had 9.52 million visitors, according to the New Orleans Convention and Visitors Bureau and New Orleans Tourism Marketing Corporation. Tourists spent $6.81 billion in the city.

With the national Jewish population at 2 percent of the total, that means close to 200,000 Jewish tourists — but Michael Weil, executive director of the Jewish Federation of Greater New Orleans, noted that Jews “tend to be far more mobile and a larger part of the tourism market in general,” so the numbers are likely much higher.

The New Orleans Tourism Marketing Corporation even has a web page, “Oy! Such a Home!” about Jewish resources in the city.

Joel Brown, owner of Kosher Cajun in Metairie, said barely a day goes by without him bringing a delivery to out-of-towners at a hotel, a convention or business meeting, from a sandwich to a supply of kosher groceries.

Weil said the attraction to New Orleans is very broad-based because of the area’s culture, wide range of activities and history, rather than just coming to see Jewish New Orleans. “It’s not like Prague where you are doing a Jewish pilgrimage, or Rhode Island where you’re going to Newport to see America’s oldest synagogue.”

Whatever the motivation, Jewish tourists are flocking to New Orleans and they are interested in the local Jewish community.

Brown said that is one of the most enjoyable aspects of his business — meeting the visitors, playing Jewish geography and answering their questions. The first thing they usually ask, he said, is about the community, and then Katrina is usually one of the next questions.

A significant portion of New Orleans visitors comes for conventions. After Katrina, numerous Jewish organizations made a point of supporting the then-recovering convention market by having their meetings in New Orleans.

The city hosts dozens of conventions each year that each draw at least 3,000 participants. Many of those conventions, especially in the legal, medical and educational fields, have a significant proportion of Jewish delegates.

Some tourists are attracted to uniquely Jewish expressions of New Orleans life, such as early in Mardi Gras season when the two Jewish Krewes, Jieux and Mishigas, march in their respective parades.

Touro Synagogue’s JazzFest Shabbat is a similar draw for Jews attending JazzFest. The annual event packs in a full house for Shabbat services and a special jazz performance. Touro Executive Director Kerry Tapia estimates that between 10 and 20 percent of the crowd is from out of town.

Anshe Sfard often is the point of entry for visitors, as the closest synagogue to the French Quarter and CBD. The small Orthodox congregation routinely has visitors on Shabbat, sometimes hosting a dozen or so conventioneers.

The Shabbat before the Super Bowl, they had about 30 visitors.

Because of the large number of Jewish tourists, New Orleans has kosher availability far beyond what is normal for a Jewish community of roughly 10,000 — especially given that the community is predominantly Reform.

In Metairie, there are Casablanca and Kosher Cajun. In New Orleans, Waffles on Maple is near Tulane, and another location in Metairie is planned, along with a new kosher restaurant in the Warehouse District. Also Uptown is Hillel’s Kitchen at Tulane Hillel, which is open to the general community.

Places that are not kosher certified but of interest to the community include the Philadelphia-meets-Louisiana Stein’s Deli, the new and renowned Shaya Israeli restaurant, Israeli-owned steakhouse Doris Metropolitan, Green to Go at the Uptown Jewish Community Center and Mardi Gras Zone. Bagel establishments, though, have been a bit more fleeting in recent years.

Because travelers who keep kosher tend to check on availability before traveling somewhere, Brown advertises in the Jewish Press, an Orthodox newspaper in New York, and a national kosher restaurant magazine.

Brown said a kosher meal can be had in just about any restaurant in the city, “made by us, on china, with silverware.” A few years ago, convention officials noted the number of Jewish VIPs coming to town and asked Brown to develop something beyond the typical pre-packaged kosher meals, so he developed these meals, which are double-wrapped so they can be heated in a non-kosher oven, and which come with extensive preparation instructions.

This way, if there is a business luncheon for 20 people and two or four happen to be kosher, they have an easy option and don’t just have to drink and not eat.

Because of their kosher expertise, Kosher Cajun also can supply halal, gluten-free or dairy-free meals as needed.

Belinda Dahan said Waffles on Maple has done some catering for conventions, and they have sent many meals downtown.

While Jewish history may not be the motivating factor for the bulk of Jewish tourists, New Orleans is becoming one of two anchor points for Jewish tours of the Deep South. Many groups touring the Mississippi Delta’s Jewish history bookend the trip with New Orleans and Memphis as the starting and ending points.

In the aftermath of Katrina, a large number of Jewish congregations and other groups did mitzvah trips to New Orleans, to help in the city’s rebuilding process. With the 10th anniversary of the storm approaching, those groups are still coming.

The Reform movement’s National Federation of Temple Youth does an annual Summer Experience, bringing teens to New Orleans for two weeks of volunteering and local touring, with a side trip to the Jacobs Camp in Mississippi, and civil rights sites in Selma, Montgomery and Birmingham.

“Jews want to hear about the Jewish history of the places they visit,” Schwartz said, adding that they feel pride when they see the large number of contributions local Jews have made to civic life in New Orleans.

There are also numerous walking tours that highlight a wide range of Jewish sites.

“Anyone who comes to New Orleans has an amazing time,” Brown noted.