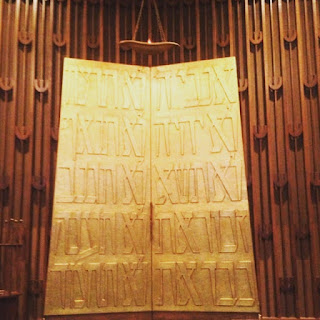 above: the ark doors at Beth Israel in Jackson

The New Orleans Jewish community marked 10 years since Katrina with a brief commemoration, concert and New Orleans-style feast on Aug. 30. Above, the New Orleans rabbis and cantors lead a remembrance.

Beth Israel in Metairie held a weekend of events marking the congregations’ renewal after their previous facility was made unusable following the levee breach.

Biloxi’s Beth Israel marked the occasion with a low-key Shabbat service that started at its pre-Katrina location on Aug. 28.

A former accountant at Birmingham’s Temple Emanu-El pleaded guilty to defrauding the congregation of over $41,000.

The Margolin School in Memphis was hit by vandalism, including swastikas, this week.

Israeli Laeticia Beck finished 13 shots from the lead at last weekend’s Yokohama Tire LPGA Classic in Prattville, Ala., which put her in a tie for 35th place. She is the only Israeli in the LPGA. She earned $7,603 in prize money.

A Jewish candidate for mayor in Nashville goes after his opponent, claiming she fights with Christian faith-based organizations and refers to them as the “Jesus industrial complex.”

Phoebe Ministries in Allentown, Pa., will honor Rabbi Jim Egolf with the Foose Award this month. Egolf formerly was rabbi at Beth Israel in Jackson.

Mississippi State Hillel is hosting a golf tournament to raise funds for the Jewish student organization. The Sept. 20 event will be at the Mississippi State golf course. Registration is $50 per player or $100 per team. Sponsorships are available starting at $75. The Hillel was founded in 2010 and seeks to grow Jewish life at the Starkville campus.

Birmingham’s Temple Beth-El will have a discussion on “Forgiveness and Judgement” on Sept. 5 at 8 p.m. with Judge Deborah Goldstein, Matt Swerdlin and Rabbi Randall Konigsburg.

Birmingham’s Knesseth Israel will have a pre-Selichot musical Kumsitz and Havdalah, Sept. 5 at 8 p.m. Selichot will be at 10 p.m.

Temple Emanu-El in Birmingham will have Selichot services as part of Shabbat services on Sept. 11 at 5:40 p.m.

Temple Emanu-El, Dothan, will screen “Woman in Gold” on Sept. 5 at 5 p.m., during a covered dish dinner. Members are asked to bring a dish; drinks and dessert will be provided. After dinner, Havdalah and a short Selichot service there will be the annual ceremony of changing the mantels on the Torahs.

At Temple B’nai Sholom in Huntsville, “The Sturgeon Queens” will be screened on Sept. 5 at 7 p.m. A reception will be held, sponsored by Uzi and Rabbi Elizabeth Bahar, and Ann Lois Ballon. Services will start at 8:30 p.m.

Etz Chayim in Huntsville will have Selichot on Sept. 5 at 8 p.m., with a screening of “The Chosen.” The service will begin around 10 p.m.

Ahavas Chesed in Mobile will have a Night of Jewish Soul Food, Sept. 5 at 8 p.m. Chef David Smith will lead a class in how to make Shakshukah. Selichot will follow.

Agudath Israel-Etz Ahayem in Montgomery will have Selichot on Sept. 5 at 8 p.m.

Pensacola’s Temple Beth-El will screen “A Serious Man” by the Coen Brothers, Sept. 5 at 7 p.m. Rabbi Fleekop will lead a discussion about responsibility, forgiveness and generosity in an unpredictable world. Services will follow at 9 p.m. The evening will be at First United Methodist Church.

Beth Israel in Metairie will have Selichot on Sept. 5 at 9 p.m.

Gates of Prayer in Metairie will screen “Stranger Than Fiction” on Sept. 5 at 7 p.m. A reception will follow, and Selichot services will be at 10 p.m.

Shir Chadash in Metairie will have Havdalah and Selichot on Sept. 5 at 8:15 p.m. The congregation’s first activity 55 years ago was a Selichot program. This year, there will be a brief presentation from the congregation’s oral history project, focusing on members’ experiences during and after Katrina.

Anshe Sfard in New Orleans will have Selichot on Sept. 5 at 10 p.m.

Touro Synagogue will have a screening of “The Anonymous People” followed by a dinner and discussion. The documentary is about the over 23 million Americans in long-term recovery from addiction to alcohol and other drugs, in an effort to bring this out from the shadows and stigma, and into the public arena just like breast cancer and AIDS over the last two decades. The film will be screened at 5 p.m. on Sept. 5. The 6:30 p.m. dinner and panel will include Jose Calderon-Abbo, who is certified in psychiatry and addiction medicine; Dan Forman of the Hedge Group, a health care consultancy that works with Townsend addiction treatment centers; and John Antonucci, an addiction counselor. The film will also be screened at Temple Sinai on Sept. 9 at 6 p.m. A discussion with filmmaker Greg Williams, who is in long-term recovery from addiction to alcohol and other drugs since age 17, will follow the screening.

B’nai Zion in Shreveport will screen short videos from “Jewish Food for Thought: The Animated Series” on Sept. 5 at 7:30 p.m. Selichot will be at 8 p.m.

Beth Israel in Jackson will have a Selichot Healing Service, Sept. 5 at 9:30 p.m.

Birmingham’s Levite Jewish Community Center introduced J Explorers, a new series of programs for children ages 5 and under. Classes run one month at a time so children can explore many new activities and find their passion. Sample classes include Spanish, dance, art, chess and more. Explorers runs from Sept. 7 to May 27.

Chabad at the University of Alabama is having a Shabbat event on Sept. 4 at 7:30 p.m.

Ahavas Chesed in Mobile is restarting its Gan Shalom preschool. Starting Sept. 9, the preschool will be open on Wednesdays and Fridays from 9 a.m. to 1 p.m. for ages 18 months to 3 years. Cost is $85 per month.

Chai Mitzvah, an interactive adult Jewish learning series, will meet this year at the N.E. Miles Jewish Day School, led once again by Sheri Krell. Monthly sessions begin on Sept. 8 at 8 a.m. and the one-hour classes include breakfast. Cost is $18 for the year.

The Ahavas Chesed Sisterhood in Mobile is being revived, with the charge being led by Jean Harper and Manette Silberman. A questionnaire is being sent to all of the congregation’s women, looking for input and suggestions. There will be a wine and cheese reception on Sept. 8 from 6 to 7:30 p.m. as a kickoff to the revived group.

Rosh Hashanah will be a new beginning for Pensacola’s Temple Beth-El, as it will be the first service held in the newly-renovated sanctuary. The congregation is currently in the middle of an extensive renovation that is linking its main and education buildings. Work will continue, but the sanctuary is expected to be completed in time for the Sept. 13 service.

JewCCY will have a Rosh Hashanah opportunity for teens, Sept. 14 at 3:45 p.m. at Audubon Park. There will be “food, fun and forgiveness” and all in grades 6 to 12 are welcome. The group will meet at the St. Charles entrance.

On Sept. 18, Temple Sinai in New Orleans will have “A Look Back, A Look Ahead,” as past president Sheila Gold interviews Rabbi Edward Cohn about his years at Temple Sinai. Congregants will also be able to ask questions. Cohn has been at Temple Sinai for 28 years and will be retiring next year. The service will be at 6:15 p.m. An April 9, 2016 date has been announced for Gala 2016, which will honor Cohn.

Friends of the Cabildo’s second Thursday lecture series will welcome one of its guides, Julie Schwartz, to speak at The Old U.S. Mint, Sept. 10 at 6 p.m. She will discuss the Jewish history and influence of New Orleans. Admission is free and open to the community.

The first Kosher Red Beans and Rice Cookoff will be at Torah Academy in Metairie from noon to 4 p.m. on Sept. 7.

Chabad in Metairie is holding a community Rosh Hashanah dinner, Sept. 13 at 8 p.m. Reservations are requested by Sept. 7.

Shir Chadash will have its Uptown service on Sept. 11 at 6:30 p.m., at the home of Deborah and Dave Mintz.

Temple Sinai in New Orleans will screen “The Anonymous People” on Sept. 9 at 6 p.m., followed by a discussion with filmmaker Greg Williams. More information is in the Selichot section of this email.

JNOLA will have its annual New Year Toast on Sept. 9 at PubliQ House on Freret Street, starting at 6:30 p.m. The first drink is complimentary.

New Orleans author Patty Friedmann will speak about her latest novel, “Do Not Open for 50 Years,” at the Uptown Jewish Community Center on Sept. 9 at 1:30 p.m. This is the final work in her “Too Jewish” trilogy, a semi-autobiographical work about three generations of women in a fractured family dealing with the aftermath of Hurricane Katrina, and growing up feeling like an outsider in the New Orleans Jewish community. The program is open to the community.