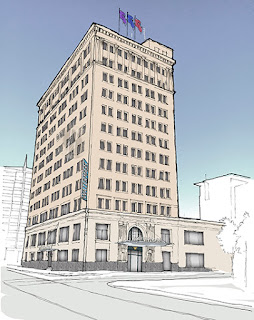 In an era when Jewish delis have been disappearing, Mike Wampold is planning to open one in Baton Rouge.

The deli will be called Milford’s on Third, named after Wampold’s late grandfather, who was a grocer in Alexandria. The deli will be in the Marriott Autograph Hotel, The Watermark, which is being developed in downtown Baton Rouge.

Wampold said there will be table and counter seating, takeout and delivery for the deli, which will be complemented by an upscale restaurant in the hotel.

Jay Haratsis, general manager of the hotel, said the deli will have “a variety of recipes that he wanted us to work with” from Wampold’s grandfather, and additional items.

He said the deli’s cornerstones will be corned beef and pastrami, and they are talking with the top suppliers. They also plan other traditional dishes like matzah ball soup and knishes. While those items may not be well-known in Baton Rouge, he thinks they will catch on. “Good food is good food, and that’s what counts more than anything,” he said.

Wampold acquired the old Louisiana National Bank building, which later became a state office building, from the Baton Rouge Area Foundation in 2013. In May, when he announced the agreement with Marriott, he said the Watermark will be “the most upscale hotel in Baton Rouge.”

A full-service hotel at the corner of Convention and Third Streets, the Watermark will have 148 rooms that Haratsis said will be themed to the building’s banking history. Built in 1926, the 12-story structure was regarded as Baton Rouge’s first skyscraper.

Wampold also has the Renaissance and Wyndham Garden Inn in Baton Rouge.