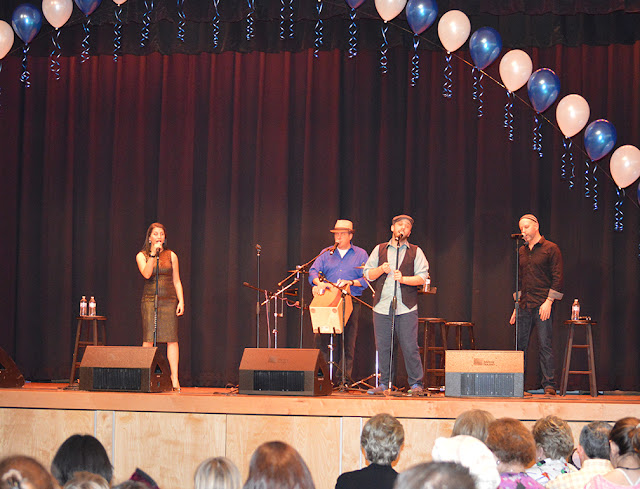 Above: Listen Up! plays the Community Chanukah Celebration on Dec. 13 at the Uptown Jewish Community Center in New Orleans.

The Economist has a comprehensive look back at the Leo Frank case, its aftermath for relatives on all sides, and the mythology that has developed around the case and lynching.

On Dec. 18, Rabbi Elizabeth Bahar of Temple B’nai Sholom in Huntsville organized an interfaith community gathering to pray for peace at the Huntsville Islamic Center.

On Dec. 21 at 11 a.m., Rabbi Robert Loewy of Gates of Prayer in Metairie is taking part in an East Jefferson Interfaith Clergy Association rally of support at the Abu Bakr Mosque.

Kenny and Ziggy’s Deli in Houston, featured in the film “Deli Man,” will open a second location in Houston in February.

The Daily Meal’s restaurant of the year? Shaya.

The Birmingham Islamic Society reported a possible extremist to the FBI, after someone “not known to our community” friended many local Muslims on social media and started sending disturbing posts.

A St. Louis rabbi who has been a prominent activist in the #BlackLivesMatter movement is being demonized by many in the movement because though on the left wing, she is insufficiently critical of Israel, and “Zionism has no place in liberation spaces led by people of color.”

Governor Phil Bryant of Mississippi and Governor Bill Haslam of Tennessee lit Chanukiyot last week. Both recently led trade missions to Israel from their respective states. An upcoming conference in Los Angeles will examine the targeting of Christian Zionists by anti-Israel groups. Among the speakers are Laurie Cardoza-Moore of Tennessee, founder and president of the pro-Israel group Proclaiming Justice to the Nations; and Rev. Gerald McDermott, Anglican Chair of Divinity at Samford University Beeson Divinity School in Birmingham.

Texas A and M is scrapping a planned $200 million campus in Nazareth and will instead have a $6 million marine research center in Haifa.

The University of Alabama’s Psi Chapter of Zeta Beta Tau announced it will hold a centennial reunion weekend from March 4 to 6. The weekend will celebrate “100 years of vibrant Jewish life on the University of Alabama campus,” including ZBT legacy organizations Kappa Nu and Phi Ep. A Founders and Leadership luncheon will honor those who founded the three fraternities, served as officers or were in the Student Government Association. Information is being requested to help identify all of those individuals. Photos are requested for the event’s Facebook page, and for use in a program and video. More information is available here.

Get your tickets now for Elton John’s concert in Israel, May 26 — which according to the promoter will be in a style inspired by his recent appearance at the New Orleans Jazz Festival.

Alabama
Benchin’ For Boobs, Birmingham Hadassah’s first-ever benchpress competition, will be on Jan. 31 at 10 a.m. at the Levite Jewish Community Center. The event benefits Hadassah research for the BRCA gene mutation that indicates a woman’s higher risk of developing breast cancer. A Hadassah oncologist recently developed a blood test that reveals it is possible to predict the presence of harmful BRCA1 and BRCA2 mutations in otherwise healthy women using a novel technology called gene expression profiling.

Chabad of Alabama, Hadassah, Knesseth Israel Sisterhood, the Levite Jewish Community Center, Temple Emanu El Sisterhood, and Temple Beth El Sisterhood will have a Mega Mega Challah Bake on Jan. 10 at 6 p.m. at the LJCC, with 200 women ages 10 and up expected. Registration is $18.

Birmingham’s Jewish community will once again be taking over the kitchen at Grace Episcopal Church’s Grace By Day community kitchen, doing Christmas lunch for those in need.

Huntsville’s Temple B’nai Sholom will be volunteering to staff the Huntsville Botanical Gardens Galaxy of Lights on Dec. 24. Nancy and Jerry Fishman are coordinating the volunteers for the evening.

Birmingham’s Temple Emanu-El will have a Movie, Shabbat Service and Chinese Dinner on Dec. 25. The featured film will be “Anna Hall” and will begin at 3:30 p.m., followed by a casual Shabbat service at 5:40 p.m. and a Chinese dinner following. Cost is $5 per person. Reserve here by Dec. 18, or pay at the door.

Temple B’nai Sholom in Huntsville will have a dinner at Ding How on Dec. 25 following the 6 p.m. Shabbat service. Reservations are requested to the B’nai Sholom office.

Chabad of Alabama’s Shabbat Around The World will stop in China for Dec. 25, with services at 5:30 p.m. at the Bais Ariel Chabad Center, followed by a Chinese dinner at 6 p.m. Advance reservations are required for dinner.

The former accountant for Birmingham’s Temple Emanu-El was sentenced to six months in prison for embezzling $41,098 from the congregation.

Florida
The Pensacola Jewish Federation’s Chai Discussion Group will tackle “Gun Control in Israel and Elsewhere: Does It Work? How Do We Solve This Problem?” on Dec. 22 at noon, at the office of Terry Gross.

New Orleans/Louisiana
Anshe Sfard in New Orleans announced that Sandy Lassen has become the congregation’s new executive director. She recently retired from that position at Shir Chadash in Metairie.

Touro Synagogue will be doing the lunch at the Rebuild Center on Dec. 25. Volunteers are being coordinated by the congregation as a limited number is needed for transporting and serving.

Temple Sinai in New Orleans will be volunteering at Bridge House/Grace House on Dec. 25, feeding those in need.

Shir Chadash in Metairie will have a Chai-Nese Dinner and Game Night, Dec. 24 at 7 p.m. Billed as “The only fully kosher Chinese meal in N’Awlins,” the dinner will be catered by Ms. Shirley from Royal China. Board games for adults and children are encouraged. Reservations are needed by Dec. 18, and are $25 for adults, $12.50 for ages 5 to 12 and free for under 5.

TRIBE, a community of young Jews in their 20s and 30s, sponsored by Gates of Prayer in Metairie, will have a Chinese Food on Christmas Shabbat dinner, Dec 25 at The Paramount at South Market, starting at 7 p.m. Space is limited and tickets are $12, available online.

The Jewish Federation of Greater Baton Rouge is serving Christmas Eve Day and Christmas Day lunch at St. Vincent de Paul. Volunteers are needed both days, from no later than 10:45 a.m. to 1 p.m. Space is limited and volunteers should reserve a spot by contacting the Federation office.

Jewish college students who are back in town for break are invited to lunch with Rabbi Robert Loewy, Phil Gaethe and Rabbi Alexis Pinsky of Gates of Prayer at East Buffet in Metairie, Dec. 23 at noon.

Jewish Community Day School in Metairie is holding a Tot Shabbat Lunch and Play on Jan. 9 at 12:20 p.m., inviting those attending the West Esplanade congregations for Shabbat to walk over afterwards. Families can make a sandwich or wrap in the KASH-ROOT Kitchen and play Shabbat related games and activities led by the faculty.

Mississippi
Beth Israel in Jackson will serve Christmas lunch at the Stewpot.

Sign up here to receive the full ‘This Week in Southern Jewish Life’ email direct to your inbox. It includes even more content including topics of Jewish interest from around the world, opinion, careers board, candlelighting times, special offers, and more.