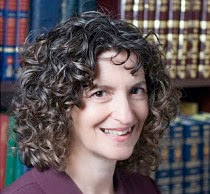 Shir Chadash in Metairie, the only Conservative congregation in the New Orleans area, announced that Rabbi Deborah Silver will succeed Rabbi Ethan Linden this summer.

Lisa Finkelstein, president of the congregation of over 300 families, made the announcement today in the congregation’s weekly email that the contract has been signed and Silver will begin on Aug. 1. “We look forward to her arrival with great anticipation,” she said.

A native of England, Silver is believed to be the first British woman ordained at the Ziegler School in Los Angeles, and will be the first female rabbi for Shir Chadash. She was ordained in 2010 and has been assistant rabbi at Adat Ari El Synagogue in Valley Village, Calif.

Silver has a Master’s degree in Hebrew Studies from Gonville and Caius College, Cambridge, England, and an MA in Theory and Practice of Literary Translation from the University of Essex, England.

She worked in theater and publishing, co-authoring “The Young Person’s Guide to Saving the Planet” for Virago Press in 1990 and acting as Senior English Editor of the “Oxford English-Hebrew Dictionary of Current Usage.”

Silver then practiced law and was an associate professor at BPP Law School. Having grown up at a time when women were not rabbis, she fulfilled a life-long desire and entered the Ziegler School. While there, she co-edited the “Walking With” series of books with Rabbi Bradley Shavit Artson. She also taught ethics at the Conejo Valley Florence Melton Adult Mini-School.

She won the Whizin Prize for Jewish Ethics in 2009 with her responsum about fair trade, and recently became a qualified yoga instructor.

Linden, who has served Shir Chadash for seven years, was recently named the new director of Camp Ramah in the Berkshires in New York. The congregation will have a camp-themed community sendoff for the family on June 5 from 4 to 7 p.m.