Many Jewish groups participating in GiveNOLA on May 3 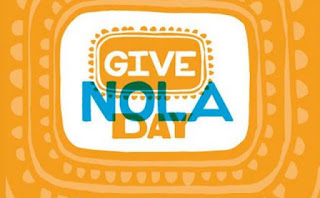 The third annual GiveNOLA Day is scheduled for May 3, and several non-profits in the Jewish community will be looking for donations.

The 24-hour online fundraiser organized by the Greater New Orleans Foundation goes from midnight to midnight, with a minimum donation of $10. All donations made on that day give the nonprofits the opportunity to earn lagniappe dollars, awards and hourly prizes.

Awards include most money raised, most unique donors and randomly-drawn $1,000 hourly prizes. Donations to the Lagniappe Fund will be distributed to all agencies in proportion to what they raised on May 3.

This year, the Federation will have several Power Hours, where individual donors have offered matching funds of up to $1,000 for gifts made during those hours. Any new gift or increase over a previous year’s gift also receives a 25 percent match from the Goldring and Woldenberg Family Foundation, so a gift of $50 equals $112.50 for the Federation.

JNOLA will have a GiveNOLA Happy Hour on May 3 from 6 to 8:30 p.m. at Tracey’s Original Irish Channel Bar. There will be a raffle every half hour, drinks and fried pickles.

In all, GiveNOLA Day raised $4.083 million through 34,539 gifts last year. The participating non-profits have to be in the Greater New Orleans area but donors can be from anywhere. Donations are made through the GiveNOLA website.