Israeli with Ala. roots signs with NBA’s Pelicans 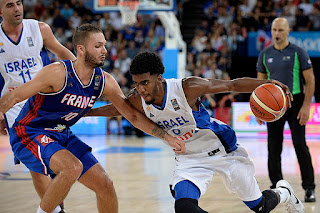 By making the New Orleans Pelicans’ 12-man roster to start the 2016-17 NBA season on Oct. 26, Israeli basketball all-star Shawn Dawson would fulfill a lifelong dream of his and his Tuscaloosa-native, Israel-basketball-legend father, Joe.

Dawson, who had led Maccabi Rishon Lezion to an historic Israel professional basketball league championship earlier this year, signed a contract with the Pelicans and begins training camp with the team this month with the aim of becoming Israel’s third-ever NBA player. After playing for the Washington Wizards’ summer league team in Las Vegas, he hopes his stay with the Pelicans is not brief.

“Ever since I was a kid it has been a dream of mine to play in the NBA,” said Dawson, 22, who said his idol growing up was Philadelphia 76ers’ guard Allen Iverson. “It’s almost hard to grasp that I am this close. I plan to work as hard as I can to make the Pelicans and make New Orleans my new home.”

He was to arrive in New Orleans on Aug. 27, having signed a non-guaranteed training camp contract. Training camp opens on Sept. 24.

Both of the other Israeli NBA players also have a Pelicans connection.

In 2009, Omri Casspi became the first Israeli player in the NBA when the Sacramento Kings picked him in the first round of the draft. In July 2014 Casspi wound up with the Pelicans as part of a three-team trade, was waived and returned to Sacramento, where he continues to play.

In 2013, Gal Mekel from Ramat HaSharon signed with the Dallas Mavericks. On Nov. 1 of that year, the first NBA game featuring Israelis on opposing teams occurred, as Casspi was with the Houston Rockets at the time. After a mid-season injury and time in the Developmental League, Mekel was waived by Dallas.

The Pelicans signed Mekel in December 2014, but he was waived after playing in four games. He has since played for teams in Russia and Serbia.

As Dawson embarks on his new chapter, he said “I feel like I have all of Israel behind me. My coaches, teammates, family and friends have all been very supportive. I am playing for all of them and me.”

His father, Joe Dawson, was born in Tuscaloosa and became a legend at the University of Southern Mississippi, which named him to the M-Club Hall of Fame in 2011. After a tryout with the former Kansas City Kings he played in the Continental Basketball Association for four years, followed by five years in Europe and South America. In 1991, he signed with an Israeli team and played there for 16 years.

While in Israel, Joe met an Israeli woman, got married and had two kids, the elder of whom is the 6-foot-6 Shawn.

“My dad has been my biggest teacher my whole life,” he said. “The best advice my dad ever gave me was that no matter who I play with or against to just be myself and play my game. He has helped me with the mental aspects of the game.”

Growing up in Israel the son of a Jewish Israeli mother and an African-American Christian father from Alabama, Shawn Dawson said he “had the best of both worlds celebrating all the holidays together with both sides of the family.”

His agent, Daniel Hazan, is a Yeshiva University graduate and says Dawson keeps his Judaism “very close to his heart.” Dawson said he is “so proud to represent my family and my country when I put that NBA logo on my chest.”

Though 22, Dawson is in his fifth year of professional basketball. At age 18 he signed with Maccabi Rishon Lezion, becoming a starter and the league’s Most Improved Player in his second season.

In 2014-15 he was named a starter to the All-Star Game and won the Rising Star Award. He got some notice in advance of the 2015 NBA draft but was not selected. That summer he played for Israel in the Eurobasket tournament.

This past season, Rishon struggled early but made a run leading into the playoffs. Dawson helped lead the team to its first-ever league championship, with 21 points in the decisive fifth game in the championship series against defending champion Hapoel Jerusalem.

“After making the national all-stars teams the past couple of years I started getting calls from the NBA. That’s when I knew that this was real and I had a chance to make it in the greatest basketball league in the world,” he said. “I have some good experience as a professional in Israel but it’s a different game in the NBA. I plan to work very hard and do whatever the Pelicans’ coaches ask of me.”

While he played for the Wizards this summer, basketball reporter David Pick explained in the New York Jewish Week why Dawson could not continue with them. The Wizards have filled their 12 guaranteed spots, and Dawson’s Israeli contract states he can not go to the NBA’s Development League. If he does not make an NBA roster this year, he would return to Israel as the franchise player for Rishon.

The Pelicans currently have 15 players on guaranteed contracts for 2016-17, so making the roster will be a challenge.

On Oct. 4, Dawson and the team will travel to China for 10 days, including a couple of games against the Houston Rockets.

Dawson has been to the United States a few times before, especially to visit family still in Tuscaloosa, but the last time he was in New Orleans was when he was 8 years old.

“I am looking forward to getting to know the city and the fans,” he said. “The New Orleans Pelicans get great support and I can’t wait to hit the courts.”