Skip Bertman statue in the works at LSU 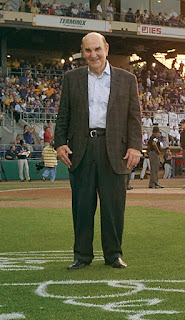 In late May, two honors were announced for legendary Louisiana State University baseball coach Skip Bertman — a statue on campus and an endowed scholarship fund in his name.

The Skip Bertman Endowed Scholarship Fund was announced by the Tiger Athletic Foundation, as part of the Foundation of Champions Scholarship Endowment Program, which began in 1999. It provides a perpetual source of financial support for athletic scholarships, with earnings from the fund offsetting the cost of scholarships for athletes.

There is also an academic scholarship in Bertman’s name, through the LSU Foundation, that is awarded to undergraduates who exhibit leadership in high school.

“Coach Bertman always stressed to his players that the ultimate goal was to be a winner in the game of life,” said TAF President and CEO Rick Perry. “The two scholarships represent his belief in the vital role education plays in achieving that goal and his dedication to Louisiana State University and Tiger athletics. We thank all the donors who funded these scholarships honoring Coach Bertman and whose generosity will impact LSU students for generations to come.”

Plans for the statue were announced by the LSU Athletic Hall of Fame Committee, with details forthcoming. The field at Alex Box Stadium was named for him on May 17, 2013.

Bertman is one of only three coaches in NCAA history to win five national championships. His teams won seven SEC championships, six SEC tournament titles and had 11 College World Series berths. His overall career record from 1984 to 2001 was 870-330-3, the highest winning percentage all-time among SEC coaches.

Thirty-one of his players made it to the Major Leagues, and he was National Coach of the Year six times.

He served as assistant coach on several U.S. national teams and the 1988 U.S. Olympic gold medal team, and was head coach of the 1996 U.S. Olympics Team in Atlanta that won the bronze medal.

In 2001 he became athletics director at LSU, overseeing a time of tremendous growth in LSU sports. It was during that time that Alex Box Stadium was built.

“I can think of no LSU athletic figure more deserving of a statue than Skip Bertman,” said LSU Vice Chancellor and Director of Athletics Joe Alleva. “He is arguably the greatest coach in college baseball history with an amazing portfolio of championships and honors. However, what distinguishes Skip the most from other coaches is the impact he made upon the sport on a nationwide level. He had a clear vision of how to make college baseball both popular and profitable, and today the game enjoys unprecedented recognition.”