Torah from India to be dedicated in St. Francisville 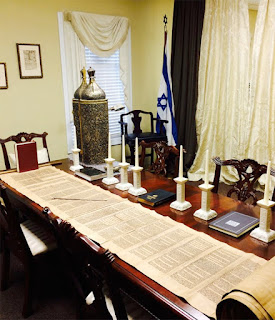 In St. Francisville, La., a community where the synagogue closed in 1921 and the Jewish community disappeared long ago, there will be a dedication of a Torah from India on Oct. 30.

St. Francisville’s Ross Nichols, senior vice president of the Union, directs Roots of Faith, the Union’s outreach effort. He does a Biblical webcast from St. Francisville every Saturday morning, presenting “ancient truth for a modern world.”

He says the sessions are “where the Scriptures are proclaimed from their original and thoroughly Hebraic perspective, and where anyone who believes in the God of Israel and seeks to live according to the principles of the Hebrew Bible is welcome.”

In 2009, he gave a talk at Temple Sinai in St. Franciscville, “Following Jesus… Out of Christianity,” and next spring will release a book by that title. Coming from a Christian background, Nichols now regards Jesus as a teacher, not the son of God, and puts his faith “in the Bible that Jesus read,” not the one that was written about him.

The United Israel World Union is an “educational research organization” formed in 1944 by David Horowitz, to be a home for those who are drawn to Hebrew scriptures to “restore Abrahamic faith” and to educate Christians about the Hebraic roots of their faith.

This month, Nichols moved a trove of Judaic books and artifacts from the group’s Charlotte, N.C. office to Louisiana.

The Torah is one of several brought to the United States from India by Edward Abrahams, who grew up in Calcutta. When he was six months old, his father was murdered by Arabs in Iraq, where he was born, and his mother brought the family to India.

He made his way to the United States in 1917, and after working on ships, he embraced a hobo life, starting out from New Orleans in 1922. He eventually settled down and went into the gas station business in New York.

In 1959 Abrahams started traveling again and went back to India for the first time since his youth. He found a community that had mostly disappeared and Torahs sitting in unused synagogues. He arranged for several scrolls to be brought to the U.S., where the Brotherhood Synagogue in Greenwich Village, N.Y., served as caretaker.

Some of the scrolls were distributed, including one to the International Synagogue at John F. Kennedy Airport.

The dedication weekend starts on Oct. 28 at 5 p.m. with an open house. At 7:30 p.m., leaders of the group will “share the vision of UIWU” and discuss future plans.

The building will open at 9:30 a.m. on Oct. 29. Nichols will present “A New Beginning: Preaching Moses Every Sabbath” at 10 a.m., and Betty Givin will speak about “The Rembrandt and the Torah: Discovering the Ancient Path” at 11:30 a.m.

After a lunch break, James Tabor will speak on “United Israel 2017: A Clarion Call for our Times” at 1:30 p.m., and Patty and David Tyler will present “The Song of Moses” at 3 p.m. The center will be open that evening, and the next morning.

On Oct. 30 at 10:30 a.m., Ralph Buntyn will present a history of the India scroll and dedicate it. Glenn Chatterton will be ordained at 11:30 a.m., and at 1 p.m. mezuzahs will be placed at the door to the building.

The center is located at 5925 North Commerce Street.

The Jewish community in St. Francisville started in the 1850s, but was not organized until a cemetery was established in 1891. Temple Sinai was incorporated in 1901, and the building was completed in 1903.

In 1904, community leader Julius Freyhan died and left money for the town’s first public school, which was named in his honor. The school, which closed in the 1950s, is located behind Temple Sinai and there is now an effort to restore the building.

Temple Sinai had difficulty finding a permanent rabbi, and wealthier members soon moved to larger communities. In 1921, the Temple Sinai building was sold to the local Presbyterians, who used it until 1994, when it was transferred to the West Feliciana Parish Police Jury. The only known meeting of Temple Sinai after the building was sold was in 1940, to sell part of the cemetery property.

In 2009, the Freyhan Foundation received a Save America’s Treasures grant that enabled a restoration of Temple Sinai.

In December 2012, the newly-renovated Temple Sinai was rededicated as a multi-purpose, non-denominational space for events and programs.

Around 2005, the West Feliciana Historical Society Museum in the visitor information center added an extensive display about the Jewish history of St. Francisville. They also have a map with several sites including historic Jewish homes.