Turning Back the Hands of Time: Jackson, Mississippi’s Olde-Tyme Deli

“When I was a little girl, your father would always give me a cookie.”

This is the kind of story that people still share with Michele Schipper, daughter of Irv and Judy Feldman, owners of Olde-Tyme Deli in Jackson. The deli closed in 2000, but for 39 years it served Jackson-area Jews and non-Jews, as well as Jewish communities across Mississippi. Sixteen years after Irv and Judy served their last Reuben, people still mourn the loss of this family-owned restaurant that was truly one of a kind.

Judy Feldman grew up in Clarksdale, where her parents, Shelda and Mike Binder, owned a dry goods store. Judy left the Delta as a young woman and landed in St. Louis, Mo., where she worked for a medical records company at a local hospital. There, she met Irv, a St. Louis native who worked in retail. They fell in love, married, and moved to Memphis, where they each continued in their chosen professions, and had the first of their three children.

For reasons the family isn’t quite sure of, Judy’s parents decided that they wanted to leave Clarksdale and move down to Jackson, the state’s capitol, and open a restaurant. They invited Judy and Irv to join them. Together, they opened Olde-Tyme Deli in Jackson’s Highland Village Shopping Center in August 1961. Their goal was simple: Provide the dishes they know best with a commitment to service, courtesy and quality. With plenty of retail experience and family recipes under their collective belt, their new venture was sure to thrive. By catering to Mississippi’s Jewish community, it soared.

“For the Jews, the deli was like Mecca,” Michelle recalls. “If you were dropping your kids off at Jacobs Camp in Utica or driving through Jackson on your way to New Orleans, the deli was a regular stop.” Of course, this was before specialty food products were available at your local Kroger. “The Deli was it,” she says. “You couldn’t buy Passover foods in the grocery store, so Jewish families would send orders from congregations all over Mississippi. The Manischewitz deliveries were big. My father would ship orders out by bus!”

But the Olde-Tyme Deli was more than corned beef and kugel. It was also known for fresh pastries, Louisiana gumbo and, to the shock of some, pork. When asked if her parents and grandparents ever considered operating a strictly kosher deli, Michelle laughs, “Not at all. It wouldn’t have made sense. There were maybe two families in Jackson that kept kosher, and my dad would make special orders for them from Chicago. But I think it was just a matter of them recognizing where they were, and they didn’t ever consider being strictly kosher.” And they were right, because most of Jackson didn’t even know what kosher meant. “One of my favorite stories is of a woman who came into the deli wanting to purchase a kosher ham,” Michele says. “She thought ‘kosher’ meant that it was better.”

Michele’s parents and grandparents not only introduced Mississippians to traditional Jewish foods, they established an environment that really brought people together — a place where regulars met every morning for coffee, and generations of families enjoyed a particular brand of hospitality. “When people remember my family’s place, I think what they’re missing is a piece of community,” says Michele. And that community extended to the employees. Some Olde-Tyme Deli staff worked for the family for a decade or more and even enjoyed a profit-sharing plan. According to Michele, when the deli closed, there were five or six long-term employees who left with a comfortable sum. A handful of those same employees keep a standing date with Irv, who turned 90 this year, at Congregation Beth Israel’s Annual Sisterhood Bazaar, where they meet over bowls of matzah ball soup and talk about the old days at the Olde-Tyme Deli.

Sixteen years after the deli closed its doors, the annual Sisterhood Bazaar is the only opportunity that Jacksonians have to enjoy some of the traditional Jewish dishes that Irv and Judy and their family shared with Mississippi. It’s the one moment during the year that Jacksonians can turn back the hands of time. 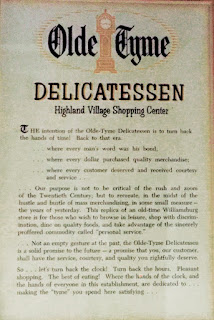 Mike Binder died in 1963, two years after the deli opened. His wife Shelda passed away in 1978. Irv’s wife Judy worked in the deli until it closed; the family said goodbye to her in 2003. Today, Michele, her sister Amy and brother Alex all live in Jackson and enjoy careers outside of the deli business. And they, too, rely on the annual Sisterhood Bazaar to enjoy the traditional Jewish dishes that their family is known for.

From the back of an original Olde-Time Delicatessen menu:

“The intention of the Olde-Tyme Deli is to turn back the hands of time! Back to that era:
…..Where here every man’s word was his bond;
…..Where every dollar purchased quality merchandise.
…..Where every customer deserved and received courtesy and service.
Our purpose is not to be critical of the rush and zoom of the Twentieth Century, but to recreate, in the midst of the hustle and bustle of mass merchandizing, in some small measure — the years of yesterday. This replica of an old-time Williamsburg store is for those who wish to browse in leisure, shop with discrimination, dine on quality foods, and take advantage of the sincerely proffered commodity called “personal service.”
…Not an empty gesture at the past, the Olde-Tyme Delicatessen is a solid promise to the future — a promise that you, our customer, shall have the service, courtesy, and quality you rightfully deserve.
So… let’s turn back the clock! Turn back the hours. Pleasant shopping. The best of eating! Where the hands of the clock, and the hands of everyone in this establishment, are dedicated to… making the “tyme” you spend here satisfying.”