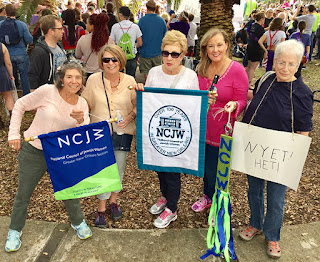 Though the Jan. 21 Women’s March on Washington and its 700 spinoff local marches around the world were on Shabbat, there was still a hefty turnout from the Jewish community, with some from the region making the trek to the nation’s capital.

Having been in New Hampshire during the primaries and in Philadelphia for the Democrat National Convention, Huntsville’s Larisa Thomason wasn’t looking for another road trip. “But as I watched president-elect Trump’s behavior during the transition, I became really concerned about the future. As he began appointing advisors and making cabinet nominations, I became frightened for the future of the country and the world.”

She figures making an issue “all about Trump” seems to be the only way to get his attention.

Michelle Erenberg, NCJW Vice President of Advocacy, was among those marching in Washington. While some Jewish groups did not officially sign on as partners in the march because of Shabbat, NCJW was a co-sponsor and the only Jewish and the only faith-based organization on the march’s policy committee.

Caroline Good of New Orleans, who was “bereft” after the election, knew she had to go to the march “and gather strength from like-minded people. It is like going to Israel and you can finally relax because you are with your own people.”

Good said she “cannot accept that this man not just represents our country, but steers it” and wanted to see what the next steps would be “to move our platform forward.”

She feels targeted by the new administration as a Jew and as a woman, but said the movement is about what affects everyone else. “This means we must address equal right for women, but also demand the fair treatment of Muslims, adopt the Black Lives Matter campaign, create easy access to reproductive care including abortion, make disability rights more than an afterthought, fight for LGBTQ community and protect our immigrant communities,” she said.

The march “made me recognize I am not alone” in calling out “people who seek to diminish others,” Good said.

In Birmingham, Dalia Abrams asked around in late December to see who was organizing a march in Birmingham. At the time, nobody was, so she decided to organize one on three weeks’ notice. “We had our first meeting four days later and 15 people showed up.”

In an interview a week before the Birmingham march, she predicted maybe 200 would show up. Instead, there were over 5,000. “There is a huge desire to do something,” Abroms said. “This gave them a chance to start.”

Debra Gordon-Hellman, who helped organize the march, did so “to join my voice with all the others that the poor, the disabled, the immigrant, the LGBTQ, the African-American, women, will not be marginalized and disrespected, and above all else I marched to bring attention to our sick planet. All other issues pale if we do not have a viable planet.”

Taking aim at the Trump administration, she said “We will not let this sick man define us, and the hundreds of thousands who marched all over the world but especially in the United States have let him know this.”

Joyce Spielberger was “awed and overwhelmed” by the turnout in Birmingham.

She said political leaders can’t be allowed to marginalize groups in society. “The March was not as a protest, but rather a coming together of those who care about their fellow man/woman and the upholding of human rights that we all hold so dear.”

Riva Bard, who said Trump sounds “like pre-war Germany,” said she marched “for mom and nana, who are Holocaust survivors… We making our voices louder than people who call in bomb threats to Jewish facilities and will send a message that we are watching this time.”

Cathy O. Friedman wore her Anytown Alabama shirt, from the high school diversity program, and her group met at the Anne Frank Tree in Kelly Ingram Park, the site of 1963 civil rights demonstrations, as a reminder of “how important freedom is for every generation.” A veteran of numerous marches, Friedman noted this was a “social cause that represents every thing I believe as a Jewish woman, that our rights are on the line and could disappear in the coming years.”

Michelle Bearman-Wolnek took her daughter “to empower her to take charge of her life and to broaden her views. To let her know that we still have a voice.”

Rhonda Schultz Weinberg went when she head her daughter, Alyssa, and three granddaughters would be marching. “We were three generations walking together,” and the oldest granddaughter, age 6, said they were marching “to show that women can be strong.”

In New Orleans, the march started at the Washington Square Park and ended at New Orleans City Hall.

Susan Kierr, president of the Greater New Orleans section of NCJW, said “I was truly impressed with the diversity of New Orleans marchers and the sense of connection among the 10,000 women of all ages, along with men and children, who moved through the streets of the historic French Quarter and the Central Business District to stand together at City Hall.”

Sefira Fialkoff said “as much as I value working within the system, it doesn’t feel like enough right now. It felt important to be in the streets, physically taking a stand to defend not only my own human rights as a woman, but the rights of those less privileged than myself.”

Though “deeply dismayed” by the election, Judge Miriam Waltzer does not question “the legitimacy of the president.” She marched in solidarity with the vulnerable and to show her resolve “to stand up and speak out whenever I see that those who govern forget the rights of people.”

Benay Bernstein said her spirits “soared” as she saw “faces full of passion as marchers proclaimed their issues, equal pay for women, climate change, women’s rights, universal healthcare. The cry was mainly for acceptance and inclusion.”

Carol Kossman attended the Jackson march, saying she had been a secretive Democrat for years. “I have not liked the things proposed by Trump and was happy when I saw that Jackson was having a march,” she said. “It was uplifting to see so many people gathering to support women’s rights and promoting love vs. hate so I was very glad that I went.”

Also at the Jackson march were Dana and Jonathan Larkin. He said the march “resonated with both the fear of repression of the victories we’ve seen in the last 50 years for the rights of all citizens, but also with the hope that a new social movement is coalescing to fight against that repression.

The march “is doing Tikkun Olam in its most basic form and it was important to us that we march with our sisters and allies around the world.”

Their daughter, Alexis Schwartz, who lives in Washington, attended the national march, “carrying all my cousins and sister and mom and grandmas and friends with me.”

In Gulfport, Milt Grishman marched “in the spirit of Shifrah and Puah, the Hebrew midwives who resisted Pharoah, in honor of strong women in every generation.”

In Panama City on the conservative Florida panhandle, Lisa Rahn was one of about 500 who marched. “As a Reform Jew, I feel it is my duty to speak up in the face of bigotry, non-tolerance and injustice, which have permeated our society too much over the last 18 months.”

While she respects the office of the president and the nation’s peaceful transfer of power, she is concerned about the direction of country. “Dissent is patriotic,” she said.

Waltzer said the march “was a great success,” but “what are we now going to do with all that energy?”

Abrams said “we are going to work to find a way to use this energy to make change… we are paying attention, and we are going to demand accountability from our elected officials.”

Sheri Krell added, “if we all become more involved in the organizations that move us, we can really improve the lives of so many.”

Bernstein said the main message for staying active is “to continue the fight by making your voice heard and not just putting thoughts out on social media. Personal letters to those in power work, visits to officials work, Group meetings with representatives work. Numbers work. Paying attention and getting cohorts out at the critical time to advance your issues work.”