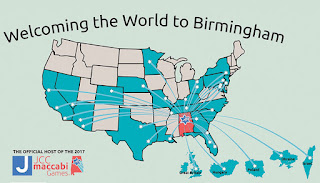 A component of the Jewish Community Centers Maccabi Games every year is international representation, and Birmingham is looking to personalize it by having Jewish teens from sister cities join Team Birmingham.

The Maccabi Games are an Olympic-style athletic competition for Jewish teens, with elements of community involvement and Jewish engagement. About 800 teens will participate in the Birmingham Maccabi Games from July 30 to Aug. 4. Over two dozen communities in the U.S. will be sending delegations, including New Orleans and Memphis.

Officially, Birmingham has sister city relationships in 12 countries. Sheri Krell, who is spearheading the Maccabi effort with the Birmingham Sister Cities Commission, said they contacted all of the sister cities with Jewish communities and three have responded so far.

“Our goal is to bring 30 teen athletes” from those cities, she said. There is an effort underway to raise funds to help bring the teens to Birmingham, including a GoFundMe page with a goal of $20,000. Donations can also be sent to the Birmingham Jewish Federation.

While the games are just under a week, the teens will be in Birmingham for two weeks, spending the first week with the greater Birmingham community, such as working with youth at the downtown YMCA and touring the area, before participating in the games.

In Vinnitsa, Ukraine, the commission is collaborating with the Vinnitsa Jewish Charitable Centre to send 12 youth to compete in swimming, table tennis and other categories. “It is very tough to live in Ukraine with the civil war going on and it is even more challenging for Jewish families,” Krell said. “We are hoping to give them two weeks of a different life.”

They are also looking for Russian-speaking families to house the Ukraine teens in Birmingham. All Maccabi participants are placed in home hospitality with a household that has at least one Jewish family member.

Last year, Birmingham’s Hannah Halpern raised $2,500 as a Bat Mitzvah project to benefit the Shubeliyot Dance Troop in Rosh Ha’Ayin, then visited Rosh Ha’Ayin over winter break and danced with them.

Halpern is partnering with the LJCC and the commission to raise the funds to bring four of the dancers and one instructor to Birmingham for the Maccabi Games. “Since most of the girls are from low-income families, this is definitely a once-in-a-lifetime opportunity for them,” she said.