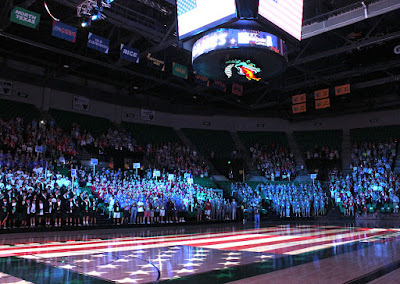 A “once in a generation” event kicked off on July 30 as 900 athletes from around the United States and across the world marched into Bartow Arena at the University of Alabama at Birmingham for the opening ceremony of the JCC Maccabi Games.

Coordinated by the Jewish Community Centers Association, the Maccabi Games bring together Jewish teens age 13 to 16 for a week of competition and community service.

Several times during the evening, during the opening ceremony and at a preceding reception, it was stated that Birmingham’s “small but mighty” community is the second smallest Jewish community to ever attempt hosting the games, with a Jewish population of roughly 6,300.

As the opening ceremony began, co-chair Layne Held spoke for the organizers, saying “this very well could be our one shot at this, so we went all in” and looked to the overall community for support, as this would benefit Birmingham as a whole.

As Held and Sokol went to the corporate community to tout the games, “most of these companies took these meetings as a favor, but they left the meetings in awe,” Held said. “Over 75 companies believed in the Maccabi story.”

Held spoke of his experiences competing as a Maccabi Games athlete, then as a coach. He recalled losing a basketball game against Atlanta in 2001, and two of the Atlanta players embracing in celebration. One of those two would be his big brother at the University of Georgia, and the other was one of the signers of his ketubah.

With the words “let’s meet the over 900 athletes and their coaches of our 28 Delegations from around the world,” Robert Levin, voice of the University of Alabama’s Million Dollar Band, began introducing each delegation with anecdotes about their communities.

Before the ceremony, Levin commented that he “can’t say enough” about the “remarkable job” that opening ceremony chairs Anna Slive Harwood and Alison Berman did in putting the evening together.

The teams walked in alphabetically, starting with Atlanta, which will host the games in 2019. They were escorted by sign-holders from Birmingham, and Junior Maccabi participants who are too young for the athletic competitions. Next to last in the arena was Team Israel, which received a rousing ovation.

As the home team, Team Alabama came in last, with a delegation from Birmingham’s sister cities in Israel and Ukraine, Rosh Ha’Ayin and Vinnytsia.

After the playing of the Canadian and Ukraine national anthems, Cantor Alberto Mizrahi led “Hatikvah” and “The Star Spangled Banner.”

That was followed by a memorial to the 11 Israeli Olympic athletes who were murdered by Palestinian terrorists at the 1972 Munich Olympics.

Junior Maccabi participants carrying electronic candles entered the darkened arena and traced a Star of David projected on the floor, standing at each angle. Younger participants then stood on an “11” in the center of the star.

After singing “Ani Ma’amin,” Mizrahi led the crowd in “Halleleuia” and “Oseh Shalom.”

Auburn Basketball Coach Bruce Pearl led the athletes in the JCC Maccabi Games Oath after giving a locker room pep talk, encouraging the athletes to embrace and be proud of their Jewish identities.

In 2009, Pearl coached the U.S. men’s basketball team to a gold medal in the World Maccabiah Games in Israel. His son, Stephen, played on the 2009 team, and just returned from the 2017 Games with a gold medal as assistant basketball coach.

Recalling the 2009 Games, Pearl said “the experience our players had there was off the charts.”

He recalled being 7 years old in 1967, when the Six Day War broke out, going to bed “not sure that Israel would be there the next day,” and to be proud of the Jewish people’s struggles.

Pearl also noted that “this wonderful country of ours allows us to gather together… to be Jews and be free. And not everyone in the world has that freedom.”

He urged the athletes to “be that shining light… we are supposed to be different. We do have responsibilities.”

Honorary co-chairs Mike Slive and General Charles Krulak carried the torch into the arena, and used it to light an array of candles on the stage. The Maccabi Games cauldron was outside the arena’s main entrance.

The torch lighting was preceded by a video from when the cauldron was poured at Sloss Furnace earlier in the month. After the ceremony, the cauldron was moved to the LJCC, where it will remain after the games.

Slive is former commissioner of the Southeastern Conference, and Krulak was the 31st Commandant of the U.S. Marine Corps, and a member of the Joint Chiefs of Staff under President Bill Clinton. Most recently, Krulak retired as president of Birmingham-Southern College.

The ceremony concluded with a concert by Jewish reggae singer Matisyahu.