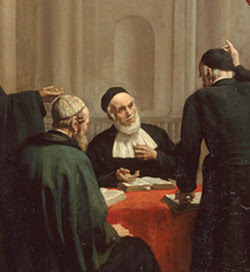 The old saying goes that for two Jews, there are three opinions.

As Jews have never shied away from a good debate, the next class offered by the Rohr Jewish Learning Institute is “Great Debates in Jewish History.” The six week course explores six fundamental conflicts that pitted the greatest Jewish minds against each other, including several that are still debated today.

The course will start with the Dead Sea Scrolls — a Dead Sea sect or rabbinic interpretation? Why was the Dead Sea sect opposed to the Pharisaic approach of rabbinic authority? The second class takes on Jewish nationalism versus religious institutionalism by exploring the suicide at Masada.

Maimonides’ approach was controversial in his time. The third session will build on that debate of faith versus reason, and the role reason plays in Judaism. The fourth explores attempts to reinstate the Sanhedrin as an attempt to hasten the messianic era. “Active Messianism versus Passive Messianism” explores whether people can — or should — try to bring about redemption.

The fifth debate is about the foundations of Chasidism, “Divine Transcendence versus Divine Immanence,” a debate that divided the community in the 1700s.

The final session is public versus private religion, in the debate over separation of church and state in the United States, in particular a 1989 Supreme Court ruling allowing menorah displays on public property.

At the Bais Ariel Chabad Center in Birmingham, the class will be offered for six Wednesdays at 7 p.m., starting on Nov. 1; or Thursdays at 11:30 am., starting Nov. 2. Both courses exclude Thanksgiving week. Registration is $89 per person.

In the New Orleans area, the course begins on Oct. 30, running for six Mondays at 7:30 p.m. at Chabad in Metairie, and Tuesdays at 10:30 a.m. starting Oct. 31 at the Jewish Community Campus in Metairie. Registration is $70, with a 10 percent discount for multiple students or returning students.