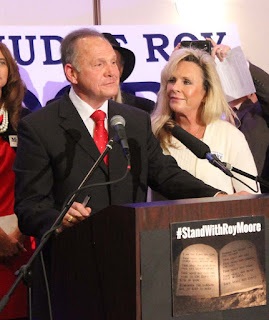 A West Point graduate and Vietnam veteran, Moore was appointed as circuit judge in Etowah County after a judge died in office. He had lost a race for that position in 1982 and a 1986 race for district attorney.

Moore was first sued in 1995 by the American Civil Liberties Union after a letter went out to judges in the state reminding them that posting the Ten Commandments and holding prayers at the start of jury sessions was unconstitutional. Moore had a hand-carved Ten Commandments plaque in his courtroom and had prayers led by Protestant ministers, and refused to back down from either.

When asked why no clergy of other groups, such as a rabbi, was invited to lead prayers, a spokesman said that there were no Jewish congregations in the area — though Gadsden’s Beth Israel, which had a resident rabbi at the time, was one block from the courthouse.

Also making news at the time was a custody case in Moore’s courtroom, where the woman was in a same-sex relationship. Moore refused to recuse himself despite his public pronouncements about homosexuality.

When the case was to be heard, Moore’s spokesman, Dean Young, alerted local churches that had similar views on homosexuality, and they packed the courtroom. When the case was removed from Moore’s courtroom, he appealed that decision.

The ACLU case was thrown out on a technicality, but Moore’s defiance won him admirers and he ran for Chief Justice of the Alabama Supreme Court in 2000.

Moore and Young also made waves in Green Bay, Wisc., in 1998, as a Ten Commandments monument was being considered for the county courthouse. The local rabbi, Sidney Vineburg, was invited to meet Moore, though the day of the meeting he and a local pastor had written a piece in the local paper opposing such a monument.

At the luncheon, Young accosted Vineburg, accusing him of representing “forces of darkness” and telling him to leave.

After Moore became chief justice, during the night of July 31, 2001, he had a 5,280-pound granite monument of the Ten Commandments brought into the Supreme Court building, without consulting the other justices. A lawsuit seeking its removal was filed in October, with Montgomery attorney Stephen Glassroth as the plaintiff of record.

The monument was moved to a side room, and a judicial complaint was issued against Moore. He was removed from office on Nov. 13, and the Supreme Court of Alabama empaneled retired judges to hear his appeal. They ruled his removal was proper.

In a 2003 interview, Rabbi Jonathan Miller of Birmingham’s Temple Emanu-El, a Reform congregation that is the state’s largest synagogue, stated he had invited Moore to speak to the Jewish community, which had not been supportive of Moore’s stances, but Moore ignored the invitations.

Moore ran for governor in 2006, losing by 2-to-1 to Bob Riley in the primary and refusing to endorse Riley afterward. He tried again in 2010, coming in fourth in the Republican primary.

In 2011 he flirted with the idea of running for president, then decided to run for Chief Justice once again, winning the post in 2012.

In May 2016, the Alabama Judicial Inquiry Commission charged Moore with ethical violations, and Moore filed an unsuccessful motion stating the commission had no jurisdiction.

Moore was found guilty in September 2016 and suspended for the rest of his term. He officially resigned in April 2017 to run for U.S. Senate.