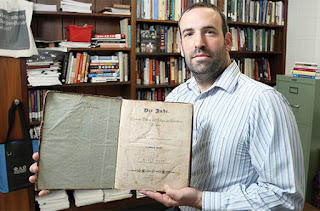 David Meola, assistant professor of history at the University of South Alabama, holds the journal “Der Jude,” created by Dr. Gabriel Riesser and published in the 1830s to advance Jewish emancipation throughout the German states.

Starting this fall, students at the University of South Alabama can earn a minor in Jewish and Holocaust Studies.

David Meola, who directs Jewish and Holocaust Studies at the university, said it is being introduced as a result of student demand and support from the area’s Jewish community. Meola, an assistant professor of history, holds the Fanny and Bert Meisler Endowed Professorship in Jewish Studies.

The Meislers first establishing a visiting professorship in 2012. In 2015, they expanded their support by making a charitable gift to establish the endowed professorship.

Their goal in supporting this program has been to expand and deepen the University’s relationship with Mobile’s Jewish community, focusing on the history, religion and culture of the Jewish people. Their hope was that their charitable giving would result in a Jewish Studies program that fosters a richer understanding of the Jewish experience among a diverse range of students at South Alabama.

Meola said the new minor’s introduction is timely. “With the rise of numerous hate crimes of antisemitism in America and the world, students will study present-day conflicts and compare it to what has occurred in history,” said Meola. “We are protecting the memory and history of Jews, sharing the innovative and vibrant culture alongside the more well-known stories of atrocities committed against the Jewish people over time and across the globe.”

All students who are interested in taking the minor will be required to complete 18 hours of courses, including three mandatory core courses that are regularly offered: “Introduction to Jewish and Holocaust Studies,” “Introduction to the Hebrew Bible” and “History of the Holocaust.”

“Jewish history is more than a lachrymose one beset by expulsions, violence, and death — it is also a story of many successes,” Meola said. “However, these moments are also tempered by our dedication to educating students and the community about the injustices and violent genocides of people around the world, both in the past and today.”

He and his colleagues “intend on making USA a great place for students to learn about diversity and the panoply of cultures that build the tapestry of our lives.”