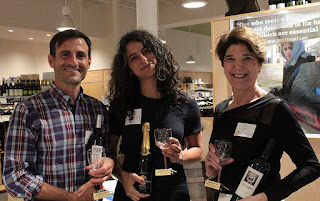 Ten years ago, Avodah came to New Orleans to work on long-term disaster recovery and strengthen the greater New Orleans community. On May 17, the agency celebrated a decade of service with “A Celebration of the First Decade” at Martin Wine Cellar.

The event honored Fran Mendler Lake, Josh Lichtman and Dana Keren, and highlighted the role Avodah has played in connecting the Jewish community to the greater New Orleans social justice and anti-poverty infrastructure.

Along with Chicago, New York and Washington, New Orleans is one of four sites in the U.S. where Avodah recruits young Jewish adults ages 21 to 26 from across the country to spend a year living together and being placed at local non-profit agencies, building a supportive, pluralistic community that promotes social activism and Jewish life.

Ten corps members live in the New Orleans house. This year, they are working at the Greater New Orleans Fair Housing Action Center, EXCELTH, HousingNOLA, Voice of the Experienced, YMCA, Communities in Schools of Greater New Orleans, CrescentCare, The Promise of Justice Initiative and The First 72+/Rising Foundations.

Since 2008, there have been 96 corps members in New Orleans. Two-thirds stayed in the community beyond their one-year commitment, and one-third are still in living in the area.

Over 90 percent of the corps members are still involved in social justice work, 65 percent have found lay leadership roles in the Jewish community and one-third have worked or are working as full-time Jewish professionals.

Lichtman was Avodah’s original director when the group expanded into New Orleans, and served in that role until 2011. He is part of the farm team at Grow Dat Youth Farm, and recently received a master’s degree in urban and regional planning.

Lichtman came to New Orleans in 2007 to volunteer in the post-Katrina rebuilding, and noticed that there was no long-term volunteer program. He mentioned it to long-time friend Barbara Lubran, and they contacted Rabbi David Rosenn, who had founded Avodah 11 years earlier in New York.

While at the time Avodah had made a decision not to expand beyond its initial three communities, the mix of post-Katrina needs with Avodah’s ideals convinced the organization to establish the New Orleans location, with Lichtman in charge of making it happen.

Keren was in the third Avodah corps in 2010-11, Lichtman’s final year as director. Lichtman “really showed me the ropes when I came to the city,” she said.

“Avodah has completely changed the direction of my life,” Keren noted. “I wouldn’t be in New Orleans if it wasn’t for Avodah. I don’t think I’d be working at Tulane. Tulane was my placement when I was a corps member, and I’m still working there today.”

Lake said her association with Avodah came when the group first started in New Orleans, because they moved in two doors down from her. “All of a sudden I had all of these young, vivacious, alive, vibrant young people in my neighborhood.”

A first-generation American born to parents who escaped Europe during the Holocaust, Lake is a retired principal and teacher at Ridgewood Preparatory School. She is past president of Hadassah New Orleans and has served on the boards of numerous organizations, including Avodah.

Lichtman praised Lake for “how supportive she has been to the program for all of these years.”

Through her association with the group, Lake said “I was never as aware as I am now, how our social justice system needs to be revamped, and that’s where my alignment is with Avodah.”

Raising that awareness and making those cross-community connections is a key goal for Avodah, Lichtman said. He highlighted the importance of the “connection corps members bring between the Jewish community and these non profits, the social justice organizations.”

Lichtman also noted what the corps members bring to the Jewish community. “Many corps members are Sunday school teachers, host Shabbat dinners and holiday gatherings,” he said. “They really become a nexus for young Jewish life in the city.”

Reflecting on the past 10 years, Lichtman said “we came in as an unknown, and now I think everyone that has an organization that could be a placement knows of Avodah and has heard great things about it.”

Rabbi Alexis Berk of Touro Synagogue, who is on Avodah’s national rabbinic cabinet, said it is “a tremendous gift that Avodah is here. It’s a blessing to the community.”

Arnie Fielkow, CEO of the Jewish Federation of Greater New Orleans, said Avodah is “a truly great organization and the work you have done speaks for itself.”

He added, “We’ll have another celebration 10 years from now, and even applaud more for the great work this organization continues to do.”