Jerry Sklar and the Running of the Stallions 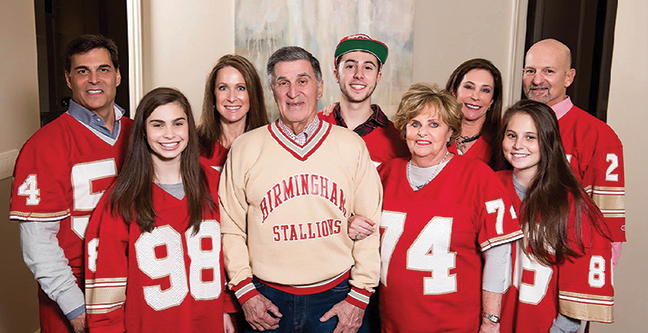 The Sklar family recalls the glory days of the Birmingham Stallions, which Jerry Sklar, center, led as team president

As the “traditional” football season gets underway, another spring league, the Alliance of American Football, is preparing for a February 2019 debut, with Birmingham, Atlanta and Memphis among the eight teams in the new league.

While Birmingham has been a cornerstone location in numerous upstart leagues, arguably the most successful was the Birmingham Stallions of the United States Football League, and Jerry Sklar was right in the middle of it.

Team owner Marvin Warner tapped Sklar to be president of the Stallions. He “twisted my arm, and I had a lot of fun with it,” Sklar said.

Sklar grew up in the Mississippi Delta, where his father, William, served as mayor of the tiny town of Louise for three terms, retiring in the early 1970s.

Sklar graduated from the University of Alabama in 1958 with a degree in accounting, and “I wasn’t going back to Louise,” he said. Instead, he pursued a retail career, eventually becoming president of Loveman’s, a department store chain with six stores in Alabama.

In 1979, New York-based City Stores, the parent company of Loveman’s, filed for bankruptcy, and in April of 1980, the Loveman’s stores were closed. City Stores announced that Sklar would become president of their 12 Maison Blanche stores in Louisiana, and Sklar moved to the headquarters building on Canal Street. That building is now the Ritz Carlton.

In 1951, City Stores had acquired New Orleans’ Maison Blanche, which was opened in 1897 by Isidore Newman. Sklar’s role during the 3 years he spent in New Orleans was to put Maison Blanche in the best posture possible for a sale. In January 1982, the sale was consummated with the Goudchaux’s department store chain.

When the sale went through, Sklar had an opportunity to stay but after almost 25 years in the retail business, it was time to take a break.

The very next month, David Dixon, who is credited with creating the idea of the Superdome and establishing the New Orleans Saints, had started working on a new spring professional league. In May, the formation of the United States Football League was announced, with Birmingham as one of the initial 12 franchises.

Warner, a Birmingham native living in Cincinnati, and former ambassador to Switzerland, was announced as the owner of the new Birmingham Stallions team. Warner was also a graduate of Alabama, where he had been a member of Kappa Nu, which eventually merged with Zeta Beta Tau.

Among the significant group of minority owners of the Stallions were some very recognizable names, such as Aaron Aronov, Fred Berman, Harold Blach Jr., Mayer Mitchell, Bernard Rapoport and Harold Ripps.

Warner had initially hired Jim Gould as president and general manager when the franchise was announced, but by July 1982, there was friction in the organization and Gould left the team. Sklar said Warner was “desperate” for a successor, and at a party hosted by Blach, asked him “who had a good reputation in the Birmingham business community,” and Black suggested Sklar. Just a few months removed from Maison Blanche, Sklar “was in Florida with my family. I wanted to relax for a while.” But Warner called.

“Boy, he was persuasive,” Sklar recalled. Warner told him to fly to Cincinnati that night, even insisting that Sklar promise to get on the plane right away. When he arrived at Warner’s horse farm, Sklar was told he would be flying to Denver to represent the Stallions as president. “We’ve got a lot to talk about before I do something like that,” Sklar responded. Sklar signed on, and said Warner “let me run the franchise, and that was something I thoroughly enjoyed.”

One of the first tasks was securing a head coach. After interviewing a number of candidates, Sklar reeled in Rollie Dotsch, the offensive line coach for the Pittsburgh Steelers, by making a trip to the team’s training camp in Latrobe, Pa. “You couldn’t get a better pro head coach at that time than someone who was working for Chuck Knoll and the Pittsburgh Steelers” of Super Bowl fame, Sklar said.

The USFL made its first big splash when Georgia Heisman Trophy winning running back Herschel Walker signed with the New Jersey Generals just before the first season started. On March 7, 1983, the Stallions kicked off against the Michigan Panthers at Legion Field, before a crowd of just over 30,000. The first season would prove somewhat mediocre on the field, with the team finishing with a 9-9 record.

After the season ended, Sklar got his next coup — signing Joe Cribbs away from the Buffalo Bills. He was the first big-name NFL player to jump to the Stallions. Since Cribbs was an Auburn alumnus, the Stallions had territorial rights, which Sklar insisted on exercising. Cribbs’ agent at the time was Jerry Argovitz, who would later become an owner of the Houston Gamblers, an expansion franchise that would be quarterbacked by Jim Kelly.

The Stallions also signed quarterback Cliff Stoudt, who was the backup for the Steelers, before the second season began.

The league expanded to 18 teams for the second season, and the Boston Breakers moved to New Orleans, giving the Stallions a local rivalry, in addition to the expansion Memphis Showboats.

The 1984 season opened with a home game against the New Jersey Generals. Sklar said Walker called him about 10 days before the game, and offered to visit Birmingham in the days leading up to the game, to promote it. Of course, that didn’t happen, “but Herschel was a great guy to make the offer.” That game did draw the largest crowd in Stallions history, 62,500, which was slightly larger than the biggest crowd for the local WFL franchises.

With Stoudt and Cribbs, the Stallions rolled to a 14-4 record and a first-round playoff win against the Tampa Bay Bandits, who were coached by Steve Spurrier. They lost in the semi-finals to the eventual champion Philadelphia Stars, coached by Jim Mora. Sklar was recognized by the league as USFL Executive of the Year.

In that off-season, Sklar also recognized the talent of a wide receiver from Mississippi Valley State University, taking Jerry Rice with the first overall pick of the USFL 1985 draft. The San Francisco 49ers would later draft him with the 16th pick in the NFL draft, and he went to the NFL, where he became one of the most heralded players in football history.

At the start of the 1985 season, things were looking good for the Stallions. Through a wave of mergers and consolidations, the league fielded 14 teams in its third season, and the New Orleans Breakers moved to Portland. Also, at the urging of the New Jersey Generals owner, a brash young real estate executive named Donald Trump, the league had voted to take on the NFL directly with a fall schedule, starting in 1986. The USFL filed an anti-trust suit, alleging the NFL conspired to have a monopoly on players, stadiums and television contracts.

But as the season started, Sklar learned that Warner would no longer be able to participate in the ownership of the team, due to Warner being in the middle of a savings and loan crisis in Ohio with his Home State Savings Bank.

Now, the Stallions had new financial challenges. While the league planned its 1986 move as the 1985 season continued, Sklar negotiated with the city of Birmingham, and because of the heartfelt following that the team had achieved, the city approved a $1 million incentives package to support the team in its third season.

The Stallions went 13-5, again making the playoffs and beating Houston in the first round, before losing again to their nemesis, the Stars.

After the season, the anti-trust suit against the NFL moved forward, with the idea that the anticipated damages would finance better talent for the eight teams that were still on board.

Another idea was that the USFL would force a merger with the NFL, vastly increasing the value of the USFL franchises.

Those plans came to a halt in July 1986, when the jury ruled against the NFL. Sklar was playing golf at the Pine Tree Country Club when the decision came down. “I was positive we were going to win the case, which we did,” he said. But when the damages were announced — $1, which was subject to tripling in an anti-trust case — “I thought it was some sort of a bad joke.”

With a whopping $3 in damages and no television contract, the USFL postponed the 1986 season, then with a lengthy appeals process ahead, in January 1987 they cancelled the 1987 season. When the appeal was rejected in early 1988, the league was finished.

As for the $3 in damages, Sklar has the check in a picture frame.

“I was very proud of all that we accomplished,” Sklar said. “We built the beginning of a great franchise. It had all the makings — if the league had made it.”

The Stallions “were very competitive for the three years we played.”

As the league wound down, Dotsch said the Stallions were one of the few franchises that stuck to the original plan of fiscal responsibility, and had the smallest losses of the franchises.

In 1985, Trump signed Heisman Trophy winner Doug Flutie to what was then the largest contract in pro football, and insisted the other teams’ owners would help pay for it because of Flutie’s overall benefit to the reputation of the league.

The Los Angeles Express signed Steve Young to a four-year, $40 million contract, which in those days was seen as over the top. To soften the effect, it was structured to be paid over 40 years.

Sklar said after the league folded, Dotsch could have had the Atlanta Falcons job, but he was hired in 1987 as running backs coach for the Minnesota Vikings. As training camp started, Dotsch was diagnosed with pancreatic cancer, and died seven months later. Sklar said they talked twice a week while he battled the cancer.

While running the Stallions was “the most fun three years of my life,” Sklar decided to “get on with my life’s work” and went into financial services industry in 1987, and had a long career with helping to open the Smith Barney office in Birmingham. That office later merged with Morgan Stanley.

Looking back on the Stallions years, he said “we worked hard, did it right, and it was enjoyable.”