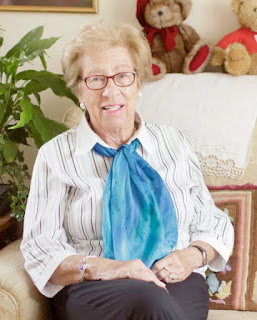 Eva Schloss, step-sister to Anne Frank, will speak in New Orleans and Tennessee in the coming weeks.

Her Nov. 6 talk in New Orleans is presented by Chabad of Louisiana and Chabad Jewish Center in Metairie, in conjunction with 80 years since Kristallnacht and 70 years since the first publication of Anne Frank’s diary, and will be hosted by the Uptown Jewish Community Center. The 7 p.m. event is open to the public.

When Germany invaded Austria in 1938, among the Jewish families who fled was 8-year-old Eva Geiringer, who moved to Belgium and then Holland with her brother and parents. She became friends with a neighbor, a German Jewish girl who was the same age, named Anne Frank.

As is well known, Anne Frank died at Auschwitz, but Eva Geringer survived, as did her mother. Her brother and father did not.

Returning to Amsterdam following the war, they met up with Otto Frank, who was dealing with the loss of his family, and the discovery of Anne’s diary. In 1953, Eva’s mother married Frank, making her Anne’s step-sister.

Since 1985, Schloss has devoted herself to Holocaust education and global peace. She has recounted her wartime experiences in more than 1,000 speaking engagements. She has written two books and has had a play written about her life.

A co-founder of the Anne Frank Trust in Britain, in 1999 Schloss signed the Anne Frank Peace Declaration along with United Nations Secretary General Kofi Annan and the niece of Raoul Wallenberg, a legendary figure who rescued thousands of Jews in Budapest.

Tickets to the New Orleans talk are $18, with an Oct. 30 deadline, $25 after. Tickets can be obtained here. Sponsorships begin at $100, and signed books are available for $20.

The event is also endorsed by the New Orleans Holocaust Memorial Committee.

Rabbi Mendel Ceitlin said “This is a special opportunity to hear a first-hand account from someone whose life intersected with one of the most compelling figures in our history.”

Schloss will also be speaking in Tennessee, coming from Illinois and then going to New England before her New Orleans appearance.

On Oct. 11 at 6:30 p.m., Schloss will be at the Nashville Music City Center, hosted by Chabad of Nashville. Tickets start at $35, $25 for students, military and seniors for general admission, $90 for reserved seating and $150 for a VIP experience.

On Oct. 14, she will speak at Soldiers and Sailors Memorial Auditorium at the Tivoli Theatre in Chattanooga. Tickets are $25 for adults, $20 for groups of 10 or more. Doors open at 6 p.m. for the 7 p.m. (Eastern) talk.

Her Memphis talk will be Oct. 16 at the University of Memphis’ Michael Rose Theatre. Sponsored by the Chabad Center for Jewish Life, Memphis, the talk is also presented by the Unknown Child Foundation, which is working to build a children’s Holocaust memorial in northwest Mississippi.

The memorial is an outgrowth of the “Pennies Project” effort by Horn Lake Middle School to collect 1.5 million pennies to represent the 1.5 million Jewish children murdered in the Holocaust. Diane McNeil, coordinator of the Unknown Child Foundation, said Schloss “is extremely important to us because Anne Frank is one of our pennies.”

Also co-sponsoring are Facing History and Ourselves, the National Civil Rights Museum at the Lorraine Motel and FedEx.