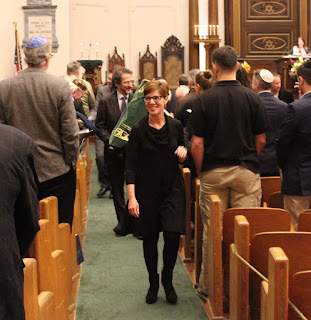 After 11 years leading Touro Synagogue in New Orleans, Rabbi Alexis Berk is leaving the congregation next summer to take the pulpit at what she describes as the only place she would leave New Orleans for.

Berk will become senior rabbi at Temple Solel in Cardiff by the Sea, in San Diego, Calif.

Berk said she grew up splitting time between Massachusetts and San Diego, where her father lived until he died in 2012. She and her husband, Bob, met while attending the University of California at San Diego, and they have traveled there several times a year.

Since arriving in 2008, Berk said, she has been “plainly smitten with Touro Synagogue” and describes her rabbinate there as “blissful, unshackled, creative, joyous, challenging, exciting, energizing.”

This was the only time in her 11 years at Touro that she has pursued another opportunity, exploring the possibility when the San Diego pulpit came open. “Our family’s extreme love for San Diego propelled this move,” she said. “It became clear that this is the right time and the right place for our family at this moment.”

Teri Hunter, Touro’s president, said Berk informed her about the move just after Thanksgiving. Berk “has been an extraordinary Senior Rabbi for Touro Synagogue and has helped move our congregation from strength to new strength,” Hunter said.

Laura Levy has been appointed search committee chair and a committee is being formed, and the application to the Central Conference of American Rabbis is being completed.

“Together we will ensure that Touro remains robust and healthy during this current transition of Senior Rabbi leadership and beyond to our next chapter,” Hunter said. “As always, we will do this together.”

Berk becomes the third New Orleans rabbi to announce a departure this year. On Oct. 8, Beth Israel in Metairie announced that Rabbi Gabriel Greenberg asked that his contract not be renewed when it ends this coming summer, and on Oct. 24 Temple Sinai made a similar announcement regarding Rabbi Matthew Reimer.

In 2016, Berk was the youngster among the three Reform congregations on the South Shore, as Rabbi Edward Cohn was retiring after 29 years at Temple Sinai and Rabbi Robert Loewy had been at Gates of Prayer in Metairie since 1984. Next summer, Rabbi David Gerber, who was just installed at Gates of Prayer last month following Loewy’s retirement, will become the longest-tenured senior rabbi at a Reform congregation on the South Shore.

Coincidentally, Rabbi Adam Wright, associate rabbi at Temple Solel, will be visiting Birmingham’s Temple Emanu-El this weekend, and a Dec. 9 congregational vote is set to ratify the board’s decision to hire him as Emanu-El’s new senior rabbi.