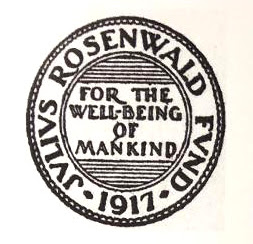 While in recent years there has been increased awareness of Rosenwald Schools, Longue Vue in New Orleans is highlighting an even lesser-known but also highly significant aspect of Julius Rosenwald’s legacy.

“An Artistic Heritage: The Julius Rosenwald Fund” opens on Feb. 1 and will be displayed through July 28 at the historic home. Rosenwald, a Jewish philanthropist who headed Sears, Roebuck and Co., established the fund in 1917, and by the time it closed in 1948, it had made grants to 862 “individuals of exceptional promise” who needed assistance getting to the next steps of their careers.

Of those recipients, 190 were for arts in such diverse fields as metalworking, language, literature, and fashion design, along with traditional media of painting, sculpture and music. The exhibition highlights 20 of those recipients.

Before the fund was established, Rosenwald started a partnership with Booker T. Washington, providing seed money to build community-supported schools for African-Americans. Over 5,300 Rosenwald Schools were built throughout the South from 1914 to 1932, and a small fraction of the buildings still exist.

With a philosophy of “give while you live,” Rosenwald started his fund, which was unique for its time because recipients were not discriminated by race or field of study.

Lenora Costa, the exhibit’s curator, said the facility recently began an artist in residence program, and this exhibit demonstrates the connection between art and Longue Vue.

Longue Vue was the home of Edith and Edgar Stern. Edith was the daughter of Rosenwald, and the Sterns had a large philanthropic legacy in New Orleans, including Dillard University, Country Day School, Pontchartrain Park, the symphony and the New Orleans Museum of Art.

Board minutes from 1928, displayed as part of the exhibit, spoke of the fund’s flexibility in issuing these grants, that “other American foundations are too large and too formal in their organization to attempt this kind of thing.”

While any foundation “might be very proud to have assisted in the work of Pasteur, Koch, or Darwin,” it is hard to select people with that level of potential. Nonetheless, “the possible results are so great as to justify a few experiments.”

Costa said the Rosenwald Fund grants were in the neighborhood of $1,000 to $3,000, which in those days “was a considerable amount of money.” Many of the artists were already known in some manner, but with additional education or exposure to other ideas they could truly blossom.

The grant was “that next step up,” Costa said.

For example, Jacob Lawrence, considered one of the most important artists of the 20th century, was a recipient. In 1940, he received a $1,500 fellowship so he could have a studio space and concentrate on one major project. That turned out to be his celebrated Migration Series, 60 panels depicting the Great Migration of African-Americans from the South to the North.

The writer James Baldwin received a grant and followed a couple of other black artists to France, where he wrote “Go Tell It on the Mountain,” and the book that is currently a feature film, “If Beale Street Could Talk.”

Pearl Primus was a groundbreaking dancer who promoted African dance as worthy of study and performance. Her grant enabled her to spend a year in Africa in the late 1940s, observing and recording traditional dances in numerous countries.

Shirley Graham, while a student at Oberlin, became the first African-American woman to write and produce an opera with an all-black cast. The debut in 1932 drew a crowd of 10,000 at Cleveland Stadium.

Some of the recipients had Louisiana ties. Conrad Alfred Albrizio first came to New Orleans in 1920, and in 1931 received his first fresco commission for the new State Capital building in Baton Rouge. He was on the faculty at Louisiana State for two decades, and one of his largest projects was the Union Passenger Terminal in New Orleans.

Costa noted, “it’s nice to be able to connect all of them to a little museum in New Orleans.”

As part of the exhibit, there is an iPad where clips from some of the performers can be viewed. There is also rare footage of Rosenwald speaking — giving an opinion not to think someone is credible just because he is rich, as there “is ample evidence to the contrary” — a lot of “mediocre” people who fell into circumstances where they couldn’t help but get rich but otherwise should not be viewed as experts.

The exhibit is viewable as part of the admission to Longue Vue. Programs connected to the exhibit will be announced at a later date.