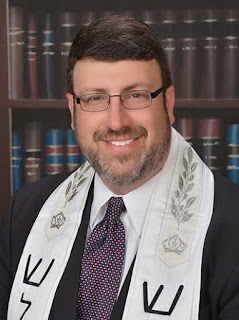 The congregation’s search committee and board both voted unanimously to select him.

“I feel very honored to become Temple Sinai’s next Senior Rabbi and am thrilled to be joining the congregation in time to celebrate its 150th birthday next year,” said Sherman. “I am very excited to help our members find their own paths to live modern and meaningful Jewish lives.”

Temple Sinai President Robin Giarrusso said “We are very pleased to welcome Rabbi Sherman to our community. We look forward to his engaging and warm demeanor, zest for teaching all ages, and strong belief in community service.”

A Tulsa native, Sherman has been active in the Reform movement throughout his life, attending the movement’s summer camps and the National Federation of Temple Youth.

His father, Charles Sherman, was rabbi of Temple Israel in Tulsa from 1976 until his retirement in 2013.

Sherman received his degree in history at Yale University, and has a Masters of Arts in Hebrew Letters from Hebrew Union College-Jewish Institute of Religion.

He was ordained in 1999, becoming the assistant and associate rabbi at Temple Shalom in Naples, Fla. In 2006, he became rabbi of Tree of Life in Columbia, S.C., and is currently senior rabbi at Temple Dor Dorim in Weston, Fla.

He, his wife Morgan, son Shai and daughter Janna will move to New Orleans this summer.

Sherman succeeds Rabbi Matthew Reimer. The congregation will hold a Farewell Shabbat for Reimer on May 10.