“Both Romi and Lior have bright futures. They are dedicated to learning and achieving on the basketball court and in the classroom,” said Pearl, whose son Stephen is an Auburn assistant coach. “We’ve been very welcoming to them and want to give them a family away from home.”

Levy, who is from Tel Aviv but her family now lives in Herzliya, developed a love for basketball at a young age. When she turned 12, she left home to attend the Wingate Basketball Academy.

“Not only did it help me to become a better player, but I learned how to manage my time and my life,” she said. “That was 20 minutes from home versus the bigger move from Israel to Auburn, but it made me more mature and ready for more challenges.”

She would go on to star at Hof Hasharon High School and she would lead the Israeli national team to the bronze medal in the Under 18 Women’s European Championships in 2018, scoring 14 points in a win over Lithuania and 13 points against Albania.

After serving her time with the Israel Defense Force, Levy and her dad, Alon, started charting a path for her to continue her basketball career in the United States.

“I love Israel and do miss it, but I felt I had achieved as much as I could in basketball there,” she said. Levy was recruited by several colleges, but Auburn Women’s Head Basketball Coach Terri Williams-Flourney was the first to send a handwritten letter inviting her to join the program.

“Romi is a passionate competitor who is coming to the States to play with and against the best,” Williams-Flournoy said. On March 4, Auburn announced that Williams-Flournoy was being let go after nine years as head coach.

Levy has dual citizenship with Israel and the U.S., and she has some family in New York as well as Miami. She had visited the U.S. several times, but this was her first time in Alabama.

The 6-foot-2 forward made her way into the starting lineup just four games into her freshman season. She is Auburn’s fifth-leading scorer with 5.6 points per game and third-leading rebounder with 4.0 per game. Levy is also third on the team in assists and steals, with 1.5 of each per game. She scored a season-high 13 points at Ole Miss and 12 points against North Florida, and she had two double-digit rebound games in SEC play with 12 at Arkansas and 11 at LSU.

On March 2, she was named to the Southeastern Conference All-Freshman Team.

This is all while adjusting to a new country; continuing to learn more English, including some new words such as “y’all” and “War Eagle,” and working toward a pre-med degree, mostly via Zoom classes.

“It has been an adjustment but I really feel at home here,” said Levy, whose parents came over from Israel to visit her for three weeks during winter break.

She said she liked Coach Pearl “from the first day I met him. He is very warm, inviting, honest. And Lior Berman is one of my best friends here.” 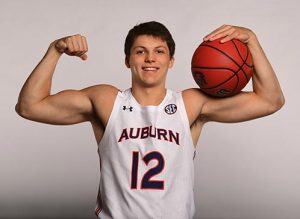 Berman’s grandfather on his father’s side, Floyd, is from Israel and Lior has visited the country several times. In 2017, he helped lead Team USA to a gold medal at the World Maccabiah Games.

“Israel is a very special place to me,” he said. “I have great memories of visiting family there… and it was such an incredible experience to be a part of the Games.”

Berman’s father, Elan, played basketball in high school and introduced Lior to the game. Floyd ran track and played lacrosse at Virginia, but would always shoot hoops with Lior on trips to Israel.

“I knew I wanted to play basketball at the next level,” said Berman. “Some Division II and Division III teams made some scholarship offers but I really wanted to earn an opportunity to play at the top level, so I walked on at Auburn.

“I love Coach Pearl. He really motivates us to be the best that we can be and he is always there for whatever we need,” added Berman. “It’s great having a Jewish coach. He’s had us over to celebrate holidays and we attend services together (pre-Covid).”

In practice, Berman is usually tasked with studying the next opponent’s top shooting guard and replicating his play to help the team prepare for what they will face.

Auburn won the SEC Championship and made it to the Final Four in 2018-19, losing to the eventual national champion Virginia. In Berman’s first year, 2019-20, Covid-19 halted the season before the conference championships and NCAA tournament.

Several Tigers were either drafted or graduated from those teams and Pearl calls this “a rebuilding year.” That means a player such as Berman can earn more playing time.

This season, the 6-foot-4 guard has appeared in 10 games for a total of 29 minutes, with 6 minutes against Troy being the most action. His scoring high was 6 points at South Carolina on Jan. 23. All four of his field goals have been three-pointers, and he made his only free throw of the season, capping off a four-point play that closed out the scoring in a loss at Alabama on March 2.

“As a team, we’re continuing to get better,” Berman said. “I want to do anything I can to contribute.”

Berman has excelled balancing basketball with his studies. He is an honors student majoring in industrial design. “I’m focused on putting in the work, learning and achieving” both on and off the court, he said.

Pearl credits Berman and his other players for their dedication to the team, academics and adjusting to a new normal with Covid-19 safety protocols.

“They’ve been a great example of how we can push forward, work hard, stay safe and still live the dream,” said Pearl, adding that they haven’t had one positive Covid-19 test since July 4. “They have stayed motivated and dedicated to doing everything they need to.”

He, Stephen and his wife, Nana Rose, weren’t able to host their famous Chanukah party at their house as usual. But he said Berman, Levy and some other Jewish students picked up care packages including her famous latkes. The Pearls also Zoomed some candle-lighting services.

Pearl also recently added co-author to his impressive resume. This month marks the release of “The Casualty of Contempt: The Alarming Rise of Anti-Semitism And What Can Be Done To Stop It.”

The book is a collection of essays and stories edited by Aaron David Fruh of Mobile. Pearl contributes the book’s foreword, along with LSU Head Basketball Coach Dale Brown, and one of the essays.

Pearl also said he was named to join the board for the Birmingham-based JH Israel organization, and he hopes to take his team on a trip to Israel as early as this summer if it is safe to do so.