Many changes at New Orleans ADL office — and beyond

The Anti-Defamation League’s South Central office in New Orleans announced that Aaron Ahlquist is becoming the director of community engagement for the Southern division, while Lindsay Friedmann is taking his former role as regional director.

Melissa Licali, the South Central education director, will be the division’s associate director of No Place for Hate, bringing her bullying prevention expertise to more educators and families throughout the South helping to create stronger, more empowered community of schools for our students.

The South Central office is in charge of Louisiana, Arkansas and Mississippi.

“These exciting operational changes are reflective of current times and ADL’s growing need to expand our impact through coalition building, legislative engagement, and education,” said Irving Warshauer, ADL South Central Regional Board Chair. “Both Lindsay and Aaron are deeply committed to honoring ADL’s mission and strengthening ADL’s voice both the region and throughout the South.”

Ahlquist will remain in New Orleans and be part of the new division that encompasses 11 states in four ADL regions — Florida; the Southeast office that serves Georgia, Alabama, Tennessee and South Carolina from Atlanta; the South Central region; and the Heartland office in St. Louis, which covers Missouri, eastern Kansas and southern Illinois. Licali will also remain in New Orleans. 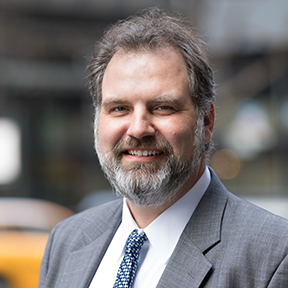 Ahlquist, who succeeded her in New Orleans in 2017, said Padilla-Goodman “has been really creative in thinking how we can better serve the South and the division,” using regional teams to help efficiency and eliminate duplication of effort.

In his new role, Ahlquist will be responsible for building a strategy that will serve as ADL’s voice in community engagement, legislative policy and incident response for the division’s 11 states.

He said ADL is unique in how it helps communities respond to incidents of antisemitism, hate or bigotry, and having a staff member whose sole responsibility is incident response will “elevate how we make impactful responses. “It’s something we already do well, but having someone who can focus on that exclusively” will enhance the agency’s response.

The division will also have someone dedicated to Jewish community engagement, to raise the profile of ADL and its offerings. An educational team will focus on programming and educational outreach.

Ahlquist said the goal is to give the regional offices access to a greater level of support than they previously had. “I’m really excited to see how this is going to evolve,” he said, as ADL becomes “increasingly impactful and responsive as an organization… at a time when it is absolutely critical.”

Friedmann wants to see the ADL become even more of a household name, saying people who are involved “all have our stories that brought us to ADL or why we know about ADL.” There is something “inherently personal” behind the involvement, she said. Perhaps there was an antisemitic incident, or bullying at school, “there’s a personal reason you are connected to the work,” and she wants to highlight those connections.

The agency’s mission “is to drive out hatred at its root and at the youngest age,” she said.

Shortly after moving to New Orleans in 2013, she joined ADL, working on the educational side, then moving into development and programming. “As I got to know the work of ADL, I was drawn to whatever I could do to move ADL forward, in whatever that capacity was,” she said.

Friedmann has expanded ADL’s signature education programs – No Place for Hate and A World of Difference, initiated ADL’s annual Fighting Hate for Good Art and Poetry Contest, and implemented the South Central region’s first Glass Leadership Institute program for young professionals throughout the community. Friedmann also helped launch New Orleans’ first ADL In Concert Against Hate in 2019 and has grown the A.I. Botnick Torch of Liberty Award Dinner to over 600 attendees annually.

She was “really open to serving ADL where ADL needs me most,” and figured that Ahlquist, with his deep New Orleans roots, was going to lead the region for a long time. But when the division structure was announced and she saw the community engagement position description, she figured it was a perfect match for Ahlquist, and she is “thrilled” to succeed him “and to continue impacting a community that has become incredibly important to me.”

Having worked for Ahlquist and Padilla-Goodman, Friedmann said they both are “huge players” in her growth at ADL, encouraging her ideas and allowing her “to get a feel for the landscape of the region, what the region needs, how the ADL can best serve the region.” And in a region where the Jewish community is relatively small, that means coalition building.

Today, Friedmann said, there are “attacks on identity” in legislatures, anti-Israel and antisemitic attacks on the streets, anti-Asian hate and racism. “All marginalized communities are standing together in strength to say ‘enough.’ And it is hard, it is complicated, it is politicized,” but the bottom line is “we all are who we are, and we deserve to have the ability to live our life without fear.”

She added, “I look forward to working with our coalition partners throughout the region in calling out hate and bias in all its forms.”

While Covid put a halt to major events, Friedmann said there are plans “to gather in person as an ADL community by the end of the year.”