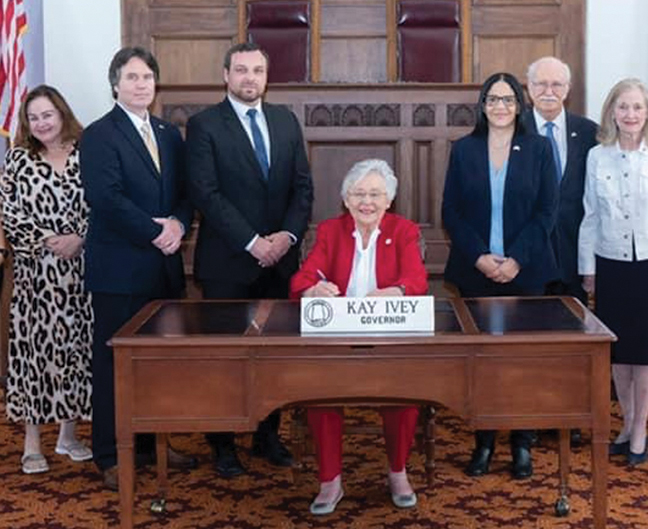 At first blush, they seem like a version of the proverbial Odd Couple.

But what has brought Huntsville’s John Buhler and Laura King together as friends and community partners is their dedication to Israel, a commitment animated by a powerful chemistry and relentless drive.

Together they, along with others, have birthed the Alabama Israel Task Force, an agile, nimble Huntsville-based juggernaut that has brought Jews and Christians together to educate about Israel and advance the country’s well-being.

Led by King and Buhler, the organization continues to be at the forefront of strengthening support for Israel and the Alabama-Israel relationship, particularly among Alabama’s legislators, the state’s governor and other high-ranking Alabama officials. Pastors Robert Somerville and Patrick Penn also have been involved from the start.

Most recently, AITF, along with other partners, played a role in motivating the Alabama Legislature and Gov. Kay Ivey to adopt a resolution supporting Israel in its military operation against Hamas.

The resolution clearly faulted Hamas for firing more than 4,000 deadly rockets at Israel’s population centers and affirmed Alabama’s support for Israel’s right to defend itself. Both Buhler and King were present in Montgomery for the signing of the resolution with Alabama and Israeli leadership.

This effort was the latest in a string of legislative and other public initiatives supporting Israel that AITF has been involved in since its founding in 2013.

One of the group’s efforts was the role it played in the state’s passage in 2016 of one of the strongest anti-BDS measures in the nation. BDS, which stands for Boycott, Divestment & Sanctions, targets Israel through economic warfare. Currently, AITF is seeing what action Alabama can take against Ben & Jerry’s under the anti-BDS legislation.

Today, this Huntsville-based, volunteer-led organization, whose sweet spot is bringing Jewish and Christian activists together, has become a force in Montgomery, a fundraising advocate for important Israeli organizations, a dynamic pro-Israel voice in Alabama, a venue for honoring government and civic leaders who’ve gone to bat for the U.S.-Israel relationship, and a strong voice against antisemitism.

It has strategically transcended partisan politics while honoring and working with political leaders.

Israel, and more recently antisemitism, have been AITF’s focus and nothing — not even the divisive issues and partisanship that are ripping people apart today — get in the way of the organization pursuing its goals.

AITF was birthed in 2013 in a very “beshert” way — it was meant to be. King was at a wedding in Georgia where she met Israeli Eeki Elner, founder of the Israel Leadership Institute, and decided she wanted to arrange for him to come to Huntsville to do a program.

“Laura reached out to Patrick Penn about hosting Eeki for an event. During that evening at his church, while Eeki was speaking, Patrick suddenly remembered we all had met in Israel in Sderot on the Gaza border years earlier,” Buhler explained.

Somerville, Penn and Buhler had all been on that trip that visited Sderot, where Elner gave the group a briefing about the situation with Gaza.

Penn “ran to his office and got pictures of us with Eeki in Israel, and we realized we were all suddenly being reunited -— unplanned, unexpectedly and providentially — in Huntsville that night,” Buhler continued. “That led to us all getting together to further consider what this might mean — and we invited others to join in that consideration. This led to the birthing of AITF.”

The year 2013 was a perfect time to launch, said Buhler. It was the 70th anniversary of the State of Alabama adopting a resolution in 1943 supporting the establishment of a sovereign Jewish state in the Biblical homeland of the Jewish people.

Moreover, not only was Alabama the first state in the union to adopt such a resolution, it did so at the height of the Holocaust when millions of European Jews, who were defenseless and had no place to go, were being incinerated by the Nazi death machine.

“We thought this was the right time to go public,” recalled Buhler.

AITF initiated a 70th anniversary commemoration of the resolution and its significance; educating and inspiring a broad array of Alabamians, and creating in state leaders a heightened sense of connection with Israel that has continued.

AITF, as it does today, advanced its cause by reaching out to key people and developing allies and partners, and augmenting these activities with an impactful website and effective social media strategy.

He was born in Tennessee and grew up in Maryland and the Florida panhandle. A University of Florida graduate with a degree in electrical engineering, he got “very serious” about his Christian faith in 1990, about the same time he moved to Huntsville to work for Intergraph.

“I was very hungry — I devoured the Scriptures, both the Hebrew Bible and Christian Scriptures,” he remembered.

In addition to being involved in his local church, Buhler began reaching out and building relationships with many in the Christian community. His immersion into his Christianity also led him to an interest in Judaism and Israel.

“When I consider my Christian faith, all that I hold dear has come to me through God, Israel and the Jewish people,” explained Buhler.

Yet, he also became anguished.

“I came to know that throughout history, no people have been more deeply dishonored than the Jewish people, by many including the Christian community, which was a heart-breaking discovery — especially with the Jewish people being entrusted biblically with a unique calling and redemptive role in the destiny of the nations.”

King was born in Hawaii. Her father did intelligence work for the U.S. government, which led to King growing up in Canada, Germany, England and Israel. She came back to the U.S. as a teenager and, as she came of age, she followed in her father’s footsteps, becoming involved in intelligence work.

Serving in the U.S. Air Force, she was an intelligence analyst, frequently residing abroad to support the work of the National Security Agency.

As her career was ascending, Jonathan Pollard, an American Jew working as a Naval intelligence analyst, was arrested and charged with spying for Israel.

As part of the backlash, King said, it became harder for Jews connected to Israel, such as herself, to climb that career ladder at NSA.

“Because of the Pollard situation, NSA was skittish of any Jews connected with Israel. That was just a no-no — not an official policy, but it was known and was an unofficial policy.

King wound up getting a job at Redstone Arsenal in Huntsville. Her first thought when she was offered a job in Alabama was “Heck no! They are going to burn a cross in my yard!”

However, relatives who had visited Alabama dispelled her initial misimpression and told her it is a very nice place to live. King apparently has agreed with them because she wound up settling in Alabama, where she has lived for 35 years. During her time in Alabama, she has made her mark in Jewish volunteer circles locally and nationally.

King became connected to Israel as a young girl. She remembers the moment clearly. She and her family were living in Germany when Palestinian terrorists murdered Israeli athletes at the 1972 Munich Olympics.

“I had not been told about the Holocaust, and while living in Germany it became almost an obsession for me to learn as much about it as possible,” she recalled.

“I had lovely German friends, but when the television started showing images of the Holocaust, it dawned on me that we are different, that we are not the same,” she remembered. “I began understanding as to why the state of Israel existed and what a miracle it was that it came into existence.”

Though of different faiths and backgrounds, this Zionist Odd Couple remains bound and motivated by a shared vision — to bring as many Jews and Christians together around their devotion to Israel to make a difference, and to remind all continually that Israel’s existence must never be taken for granted.