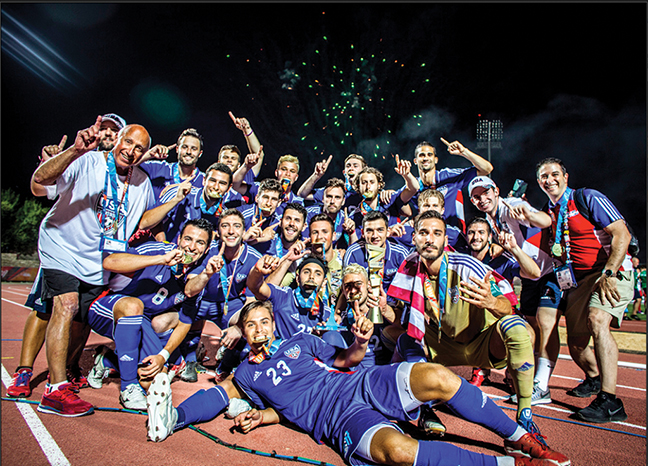 Preston Goldfarb, left, led the U.S. soccer team to the gold medal at the 2017 World Maccabiah Games in Israel

In smaller Southern Jewish communities such as Birmingham, there is a sense that longtime Jewish residents know one another.

That’s true in many cases — but not all.

Yes, we may know one another, but we don’t always know about one another, which is the main thing that makes Preston Goldfarb’s new book, “Tenacity of Purpose,” so interesting to read. 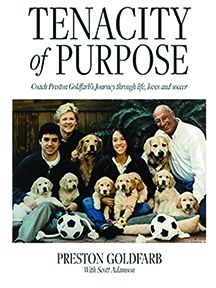 Subtitled “Coach Preston Goldfarb’s Journey through life, loves and soccer,” this book is more than an autobiography. It’s a compendium of insights from a guy who is still embracing new challenges as he turns 74 in December and who is continuing a seemingly never-ending trajectory that has touched countless lives around the world, both on and off the soccer field.

One recurring theme is Goldfarb’s pride in his Judaism, a commitment forged through the crucible of encountering antisemitism, particularly while growing up in Birmingham in the 1950s and 60s, and “how it propelled me to go forward.” He details several powerful and transformative incidents.

The book also is the story of how a young man from Birmingham, whose first sports love was basketball, gravitated toward soccer with some colorful encounters along the way, including actually enjoying his military service and interviewing for the CIA.

Over time, Goldfarb’s name would become locally, nationally and internationally synonymous with soccer.

He mainly built his legacy as head coach of Birmingham-Southern College’s soccer team for decades, but also for leading the U.S. men’s team to unprecedented back-to-back gold medals in the Maccabiah Games, a worldwide Jewish athletic competition held in Israel every four years.

Goldfarb’s book, like his approach to soccer, is straightforward, even blunt at times. Over and over, he emphasizes his core philosophy: “Peanut butter and jelly sandwich on white bread with a glass of milk.”

That philosophy of just sticking to the basics with nothing fancy is reflected throughout his book. He is direct, unvarnished at times and seems to cut to the chase in every situation he encounters.

“Tenacity of Purpose” also contains a substantial amount of “soccer talk” — which might not be familiar to those who aren’t attuned to the intricacies of the sport. However, he explains them in such a way that you not only get a sense of the dynamics of his strategy, but also the overall picture of what he is trying to achieve, particularly in motivating his players to buy into what Goldfarb calls “his system.”

Like a coach, as an author he never loses sight of his mission: to interest the reader in his own personal story and to share the lessons he’s learned which, though varied, reflect an unyielding determination to prevail coupled with a willingness to embrace thoughtful risks.

A crowning achievement, which Goldfarb pridefully recounts, is his election to three Halls of Fame — Birmingham-Southern’s, where the soccer field is named in his honor; the National Association of Intercollegiate Athletics Hall of Fame and the Jewish Sports Heritage Hall of Fame.

Today, though retired from Birmingham-Southern, the energetic Goldfarb keeps on kicking.

Goldfarb clearly has built his life driven by the words with which he has entitled his book:  “Tenacity of Purpose” — and in getting to know the long-time coach even better from reading his new autobiography,  you can sense that for him the game is far from over.

“Tenacity of Purpose” is available on Amazon and at Barnes and Noble.