Red Mountain Theatre lights up the season with Holiday Spectacular 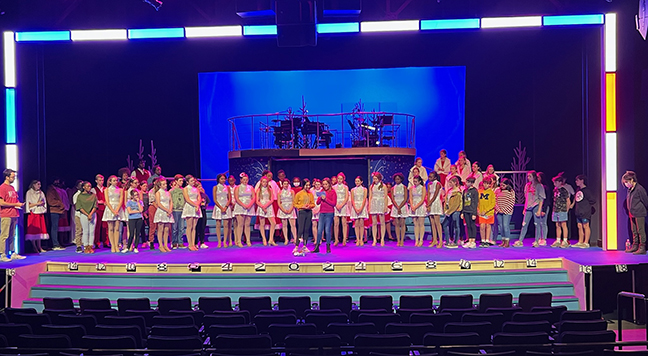 The Festival of Lights will be in the spotlight at the Red Mountain Theatre Company Holiday Spectacular in Birmingham.

The popular showcase, featuring both original and classic holiday numbers, returns to the stage Dec. 3 to 19 at RMTC’s new arts campus main theatre. As before, it will feature Chanukah-themed selections.

“With the new arts campus,” including a larger theatre and stage, “they’ve really scaled it up a lot,” said London Pigott. “We’re just so happy to have it back and it’s going to be better than ever” after the annual show was postponed in 2020. The Holiday Spectacular includes an expanded adult as well as youth cast and even some live animals on stage.

The 12-year-old performer, who is the daughter of David Pigott and Daniella Pigott, will be in her third Holiday Spectacular. London Pigott said one of the numbers in the show is an original Chanukah-themed song that will make its debut.

“We are Lights” is about seven Holocaust survivors celebrating Chanukah while waiting on immigration into the United States. “It has been very rewarding to share with some of the other kids the Chanukah traditions, what we do and the meaning behind the celebrations,” she said. “And one of the rehearsals is on one of the nights of Chanukah, so we’re going to do a special celebration with lighting the candles and saying the prayers.”

Pigott has been acting ever since she first got involved with UAB’s ArtPlay production of “Seussical” more than five years ago. During Covid, she did some voice work and acted in a scripted podcast.

She will have her Bat Mitzvah next September and plans to do her Bat Mitzvah project as a benefit for the Broadway Cares Foundation. The Pigott family attends Chabad of Alabama. “Our family really feels a real sense of community there,” she said.

Pigott has also been involved with theatrical arts productions while at Henry S. Jacobs Camp and Pizitz Middle School. “One of the first musicals I ever saw was ‘Wicked.’ It shows that our differences make us stronger. They can unite us and show that we’re never alone,” she said.

She also said that she feels that sense of unity, sharing and family being a part of Holiday Spectacular.

“I’ve grown so much in the program,” said Pigott. “They have taught me so much about commitment and collaboration.”

“It has been such a great experience being in the show and this one will be the biggest one yet,” said Senter. “We’re really excited to bring it to the stage.”

Senter has been doing theatre for five years. She got interested in the theatrical arts after seeing a local production of “Secret Garden” and the Broadway production of “Phantom of the Opera.”

Her parents, Julie and Mark Senter, moved to Birmingham 11 years ago from Los Angeles. Julie Senter said, “we’ve been to shows in Los Angeles and New York. Birmingham has an arts community that rivals those two cities, in my opinion.”

Kat Senter is also involved in the show choir at her school and she is writing a 12,000-word fiction novel for a class project.

She said in addition to acting, she is also interested in directing a play. “I have learned a lot from Keith (RMTC Artistic Director Keith Cromwell) and the directors on the show,” said Senter. “It has really been inspiring, educational and a lot of fun.”