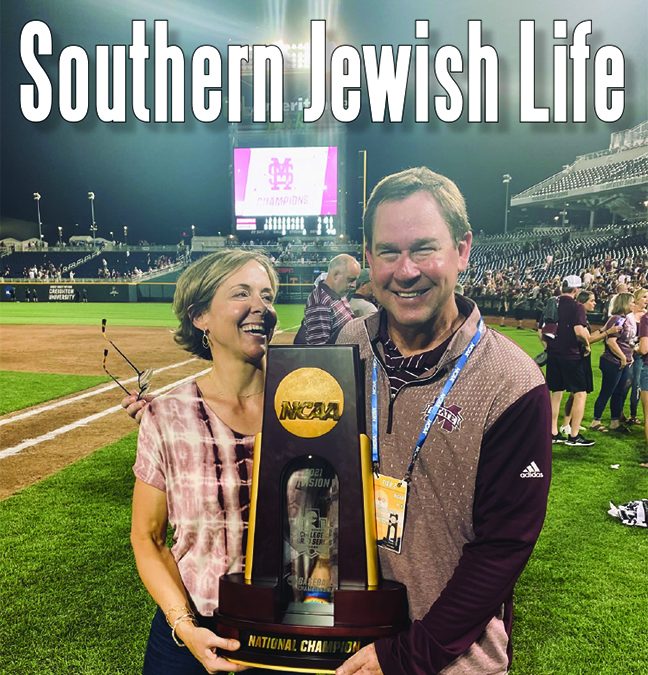 When Nelle Bashinsky was growing up in Birmingham and Tuscaloosa, she never imagined that she would marry John Cohen.

More far-fetched was that she would become the wife of the Mississippi State University athletic director.

However, the last thing this young woman could have ever anticipated was that one day she would become Jewish.

“John and I were just friends in high school. Good friends but just friends. He was Jewish and always into sports. I wasn’t interested in sports. And I had been baptized in an Episcopal church.”

One never knows what’s ahead, and now at age 53, Nelle Cohen is living an intriguing life she never could have envisioned.

She and John would begin dating — “You know how that works. All of a sudden friends become more than friends.”

Her life would become filled with sports as John, after playing baseball at MSU and in the minor leagues, began climbing the coaching ladder. Her encounters with Jewish thinking about God would transform her life and lead her to embrace her husband’s faith.

“The Jewish belief that God is omnipresent and intimate, yet infinite and ultimately unknowable, became a source of inspiration and comfort to me.”

Her saga is a fascinating tale, and this descendant of one of Alabama’s best known families — the Bashinsky family who once owned Golden Flake, famous for its potato chips — tells her story with relish.

She also tells it with irony because it turns out that Nelle is not the first Jewish person in her family. Her great-great grandfather, Leopold Bashinsky, was Jewish. He was born in Prussia in 1851 and came to the U.S. when he was 15. He had relatives in Georgia and Alabama and wound up settling in Troy, Ala.

“Before John and I got married we hadn’t really talked about religion and how it would work between us. We just loved each other and wanted to get married. Though I’d been baptized, I didn’t really feel connected to religion.”

It wasn’t until the Cohens had children that she had the urge to find a spiritual home for their family. Her husband at the time was baseball coach at Louisiana’s Northwestern State University in Natchitoches.

“I didn’t know anything about Judaism, so I started taking my children to an Episcopal church. Not only did I realize this was going to be confusing for them, I also realized that I didn’t want a household with two separate faiths.”

So she started visiting a rabbi in Alexandria, about an hour away, to learn more about being Jewish. Converting, though, was not on her mind at this point. “I didn’t want to convert just because it was the ‘convenient’ thing to do. If I was going to do it, I wanted it to be for the right reasons not simply because I was married to someone Jewish.”

The turning point came when her husband became head baseball coach at the University of Kentucky in 2003. Their kids were now six and eight. Lexington offered their family a bigger Jewish community and Nelle became very involved in their synagogue.

“They had this fantastic group of older women who ran everything in the kitchen during the High Holy Days. They welcomed me and took me in, and I just started volunteering.”

As her daughter approached the age of 12, the idea of converting started to take hold. “I loved these people. I felt like they were my people.”

So right before her daughter became a Bat Mitzvah, this Christian-raised Alabamian officially became Jewish. “Right after my conversion ceremony, we had a blessing of our marriage. It was like another wedding. It was a very profound spiritual moment for me.”

There’s one more piece to the Nelle Bashinsky Cohen story which she openly shares as she reflects on her odyssey into Judaism.

“I am in long-term recovery for alcoholism. I got sober when I was 25 — in 1993. The spiritual process of recovery through the 12-Step program was another powerful factor that made me start searching for a faith that had meaning for me.”

The answer, she concluded, was right in front of her: Judaism.

“The process of reflection, atonement and renewal during the Days of Awe is so very much in line with my journey through 12-Step recovery work — or perhaps I should say vice versa. Becoming Jewish just felt like a perfect fit.”

Today this vivacious First Lady of MSU Athletics goes about her unexpected life with energy and purpose — from attending MSU sporting events, to meeting Jewish families who come to campus, to playing a leadership role in the betterment of Starkville, to devoting herself to her two adult children and aging parents.

And there’s one more thing she never could have expected — the excited call she got last July from her mother-in-law in Tuscaloosa.

MSU had just won the College World Series and the Cohens were pictured on the cover of Southern Jewish Life magazine holding the championship trophy and beaming.

“It was a great moment for John’s mother. She had just gotten the magazine out of the mailbox. She is so proud of John, especially because there are not many Jewish people working at that level in college athletics.”

But that isn’t all John’s mom had to say, her daughter-in-law recounted with a smile.

“Nelle,” her mother-in-law added, “I never thought you’d wind up being the cover girl for a Jewish magazine.”