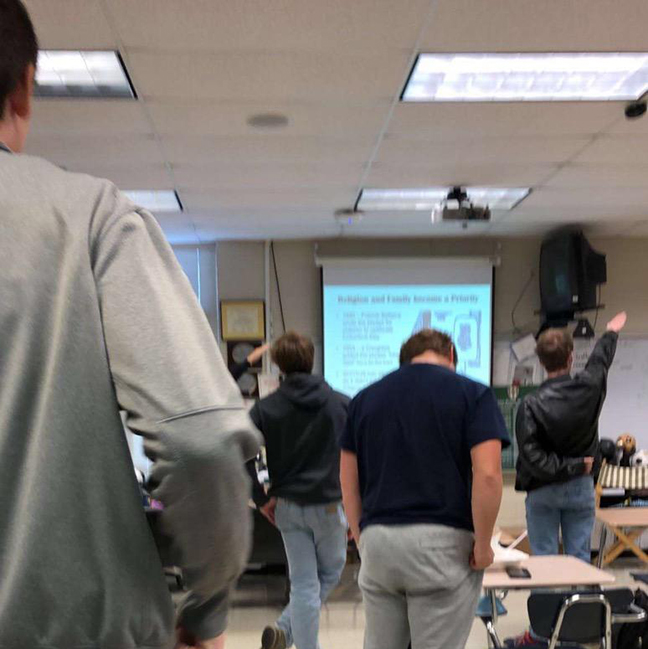 Just months after a contentious debate that led to the Mountain Brook school system ending diversity training with the Anti-Defamation League and pledging to develop its own curriculum, an incident at Mountain Brook High School has brought the spotlight back on issues of diversity and sensitivity — and how the school addresses those issues.

Central to the story is a photo that shows students doing what resembles the Nazi salute in a classroom, led by the teacher.

On Jan. 18, students in 11th grade history were instructed to stand and do the Bellamy Salute while reciting the Pledge of Allegiance. The teacher, Coach Joe Webb, had explained that the salute had previously been used when reciting the Pledge, but had been retired in the early 1940s because of its resemblance to the Nazi salute. Since then, one places a hand over the heart when saying the Pledge.

The Bellamy salute starts with an outstretched arm, palm down, but during the second phrase, “to the flag,” the palm is turned upward for the remainder of the Pledge.

After explaining the background, Webb instructed the class to rise and give the salute while reciting the Pledge.

Epps Tytell, the one Jewish student in the classroom, did not stand, and a couple other students also did not. “I was just in shock and I was confused,” he said. “I was kind of sad too, I never thought I would be in a classroom where everyone would stand up and do the Heil Hitler.”

Talking to fellow students afterward, many shrugged it off as “just a salute” and “nobody saw a problem with it.” A non-Jewish classmate managed to take a photo and a brief video clip, which Epps shared on his social media.

The Tytells said the lesson itself was just “incredibly stupid” and they were figuring on giving the school “the benefit of the doubt,” but Mariya Tytell said the school’s reaction afterward was the “egregious” part.

According to his parents, the next day, Epps was pulled out of math class and brought to the office of Assistant Principal Jeremy Crigger, where he was instructed to apologize to Webb, who was also in the room, for filming him without permission. He refused to apologize but did comply with taking the video down, and when he said he did not take the video, they tried to get him to tell them who did, a demand he also refused.

Mariya Tytell said they told him “if this blows up there will be more disciplinary action, because you are making Mountain Brook look bad.”

She said, “I’m very proud that my son didn’t cave in and apologize,” and they felt an apology should be coming from the teacher instead of from her son.

Since that meeting, the Tytells say their son’s desk was moved from the back of the room to right next to the teacher’s desk. The first day after the video was posted, Epps said everyone in the class was told to put away their phones or be marked absent. In the days following, Epps said he was told, in front of the class, to put his phone away during class, while other students were not told to do that.

He said one day after being told to put up his phone, he approached the teacher to talk with him, but in the “30-second conversation” the teacher yelled at him and “said I hadn’t apologized to him.”

“Students should feel comfortable to come to the administration and bring things like that to their attention,” Mariya Tytell said. “They are punishing not the wrongdoer but the one who is exposing the wrongdoer.”

David Tytell said the lesson itself was a “stupid choice… I get that,” but what upset him was “taking my kid to the office and threatening him with disciplinary action… and harassing him and make him apologize to the teacher,” because “my boy did nothing wrong.”

David Tytell said when he spoke with Principal Philip Holley, he brushed it off.

Holley is out of the office through Feb. 10. Requests for comment to Crigger and Webb have not been answered.

Mountain Brook Schools issued a statement on Feb. 8 detailing the history of the Bellamy Salute, saying “the focus of the lesson was the meaning of symbols, how they change, and why the Bellamy Salute should never again be recognized due to its association with the actions of the Nazi Party.”

The statement said the photo and video “are not representative of the lesson, what was being taught, or the context of the instruction that was occurring. Any representation that this picture or video represents a Mountain Brook teacher attempting to instruct students on how to use the Nazi Party Salute or instruct them to use the salute towards the American flag is unequivocally false. No students were asked to raise their hand for any reason.”

Because of “the sensitive nature of this subject,” the school system “addressed the instructional strategy used with the teacher and does not condone the modeling of this salute when a picture or video could accurately convey the same message.”

The Birmingham Jewish Federation and Jewish Community Relations Council issued a statement noting that they had been in communication with the school system since the issue came to light, and noted the context of the Bellamy Salute lesson while acknowledging “there are multiple accounts circulating of what was happening in the classroom that day.”

“We have had meaningful dialogue with Mountain Brook Schools regarding the inappropriateness of demonstrating the salute, especially in a high school classroom,” the statement continued. “They have assured us that they have had these same discussions with the teacher.

“It is our understanding that Mountain Brook Schools will continue to deal with this situation in an effective and sensitive manner. We will update the community as to the progress as we are informed. We find these types of incidents very troubling. It is our belief that they are also an opportunity for education and we hope to work closely with Mountain Brook to prevent further situations.”

A few hours after the school system’s statement, a spokesperson said the class did the Pledge before Webb spoke about the salute, and that he had never instructed or encouraged students to do the salute. Epps Tytell said Webb “instructed all of us to stand and give the salute while saying the Pledge.”

The spokesperson also said that in the original meeting, Webb apologized to Epps, but Epps said that did not happen.

Dan Puckett, a professor of history at Troy University and the chair of the Alabama Holocaust Commission, said before the 1930s “there was nothing sinister” about the salute. Now, “there is absolutely no pedagogical reason or benefit for students to act it out. Not only is it irresponsible, but it’s even more egregious given that the teacher had explained that it was changed during the war because of the Nazis’ use of the salute.”

He also wondered whether the teacher, in a further effort to be historically correct, took out the phrase “under God,” which dates back to only 1954, from the Pledge.

Mountain Brook is the wealthiest suburb in Alabama, and is over 97 percent white. The Birmingham suburb has by far the largest Jewish community in the state, as other suburbs did not welcome Jews in the 1950s. Nevertheless, stories of antisemitic conduct in the schools goes back decades, from fellow students giving Heil Hitler salutes to Jewish students, pitching pennies on the floor at Jewish students figuring the “cheap Jews” would eagerly pick them up, or swastikas scrawled around the schools.

There have also been reports of Christian youth ministers coming to campus at lunch, and conversionary efforts toward non-Christian students.

Rabbi Scott Hausman-Weiss, who is now in Houston, recalled being at the school two decades ago to provide a Jewish clergy presence amidst the Christian clergy, and noticing pennies being pitched under the table where he was sitting with Jewish students.

During last summer’s controversy, Rabbi Adam Wright of Temple Emanu-El in Birmingham recalled talking to Mountain Brook parents when he arrived in 2018. “They reflected to me their frustration with the school system, year after year after year, antisemitic comments… church groups coming in and proselytizing, using theology as a way to inflict fear and concern among Jewish students,” and that he had heard from alumni that “this is the same ethos that has been happening in Mountain Brook” for a long time.

For most of their existence, the now-defunct fraternities and sororities at Mountain Brook High School excluded Jewish students, justifying the policy through the existence of BBYO in the Jewish community.

While there had been pushes for greater diversity awareness, the effort received its biggest push after a 2020 viral video taken at a teen party showed a teen had swastikas drawn on his back, and some of those in the video were from Mountain Brook.

A Diversity Committee was assembled to assess the best way forward.

In February 2021, the school system began faculty training with the Anti-Defamation League and looked at implementing the No Place for Hate curriculum. But those efforts were derailed in June as a group of parents petitioned the school system to cut ties with the ADL, saying it has become “highly partisan” with support of “Critical Race Theory, unfettered late-term abortion rights and expansive immigration policies.”

An anonymously-produced 12-page “Mountain Brook Families Resource Guide to the Anti-Defamation League” was distributed, and condemned by the ADL as “wildly off” and “twisted.”

In response, a group called Mountain Brook Schools Alumni for Diversity did a counter-petition, with far more signatures, and there was a contentious school board meeting on July 12 where some parents spoke of the longstanding problems of racism and antisemitism in the schools, while others spoke of the dangers of diversity training, with one speaker demanding to know how the school board would “undo the damage” inflicted by the ADL training that had already taken place.

The school system decided that instead of the ADL programs, they would develop their own diversity training programs to address the issues in the schools.

At the August school board meeting, Barlow said with uncertainty over the Delta variant, they were concentrating on the reopening of schools for the year and putting the diversity issue on hold until after school begins.

Aside from an October public comment from a resident “tired of hearing about CRT, ADL, SEL, diversity committees,” the issue has not been mentioned since then in school board proceedings.

As news of the Bellamy lesson spread, MB Listens, a nonprofit grassroots organization promoting acceptance and equal treatment in Mountain Brook, issued a statement to “recognize, empathize with, and offer our support to everyone hurt by this incident, especially those students impacted by what transpired and the entire Jewish community.”

The group commended the Tytells “for their courage and conviction in speaking up” and said the community needs to support anyone trying to make Mountain Brook a more supportive community. “Our entire community, including our school system, must foster an environment where people feel safe to report behavior that they are concerned about and certainly not create an environment that cultivates any ‘fear of reprisal’.”

The MB Listens statement said the handling of this incident demonstrates the need for better understanding of implicit biases, greater empathy and more compassion.

As for the current controversy, David Tytell says at this point he is not looking for an apology. “Any apology would be meaningless because it has been going on for so long,” he said, adding that the system is an expert at sweeping incidents under the rug. “There needs to be meaningful change, not just empty words that ‘we’re going to do this in the future.’ There needs to be meaningful change, and I don’t see that happening.”