Leaving the New Orleans JCC in a Good Place 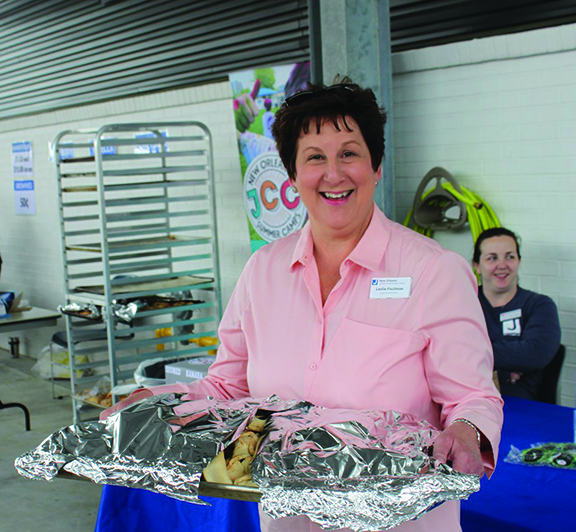 Serving the Hamantaschen at the Purim Adloyada in 2020

From hurricanes to pandemics, New Orleans has the ability to throw curveballs into plans. When Leslie Fischman steps down as executive director of the New Orleans Jewish Community Center in the near future, she will have stayed a little longer than she planned.

A national search is underway for her successor, and she has agreed to remain until the position is filled. She will still be around after she retires, as she has three grandchildren in the nursery school; next year it will be all four.

Fischman started at the JCC in 1997 as the special events and fundraising director, shortly after a major renovation was completed. After seven years, she became assistant executive director under Arlene Barron for seven years.

Fischman became executive director in March 2011. Noting that seven is her lucky number, she figured on being executive director for seven years, and then retiring. Instead, she stayed for 11 years, because in 2015 the agency embarked on a major capital campaign to expand the facility. “Every inch of space in this building was being utilized and crowded,” she said.

The $9 million campaign, the largest in the JCC’s history, added 14,000 square feet to the Uptown location, along with the Oscar J. Tolmas Aquatics Complex and enhancements to the Metairie location. The expansion included a youth activities center and an indoor pool, which they never had previously.

The renovation “modernized the building, it gave us more space, we have an area where you can sit and work on your laptop while you are waiting on your kid.”

Programming at the JCC has continued to expand, in a goal “to be the town square of the Jewish community, where all are welcome,” she said. They engage all ages, “from 1 to 101.”

The JCC has focused on “more family engagement, more intergenerational engagement” and offering “the best cultural programs that we can.”

But Covid “did slow us down with certain programs.”

When Covid hit, the JCC had its all-time high in membership units, but with the pandemic “we took a dive and a pause.” She decided to stay on through the end of the Covid crisis, “to get us on a good track” and hand over a strong agency to her successor.

When she took over after Barron retired, “the Center was in a very good place, so it was easy for me to pick up and keep going, and that’s how I want to leave it for the next director.”

As Covid moves from a pandemic to something that hasn’t completely gone away, “we are figuring out how to work with Covid.” She said they have been taking a deliberate approach toward reinstituting programs, especially family programs.

The nursery school was operating in pods as the students are too young to be vaccinated. “That has prevented us from doing larger gatherings,” Fischman said.

But as 2021 came to a close and restrictions loosened, they were still able to have some major programs. Close to 300 attended a Chanukah concert with the Maccabeats, a total that could easily have gone higheer, but “we wanted to keep some social distancing.”

A Walter Isaacson talk drew over 200, and some traditional JCC holiday events were held as drive-through celebrations during the year.

Fischman said she is optimistic that more programs will open up as 2022 moves along. She noted that people are starting to go back to the gym, and they are expanding their group fitness offerings. Pool hours have been extended because more people want to do lap swimming.

The recent Center Celebration was also reworked to be a non-event — neither in person nor virtual, but a straight-up appeal for support. She said “people have been very generous and we have been very successful.”

Ironically, “my main job when I started was to run the Center Celebration,” Fischman noted. “My last year, I didn’t have an event.”

One item she says she did not accomplish to her satisfaction has been the need to increase the JCC’s endowment funds.

And even with the major expansion, “there is still more work to do,” she said. Recently, the front entrance was reworked for accessibility and security. In the nursery school, they are trying to renovate one or two classrooms each year.

“It has been a great journey. I’ve enjoyed it,” she said, but “it’s time for new blood to keep moving us forward.”

Board Chair Aimee Bain said she “cannot say enough about Leslie’s unwavering dedication to the J over the past two and a half decades and her steadfast leadership as executive director since 2011.” She mentioned the “immensely successful” capital campaign and said that “even in the face of adversity, most recently evidenced by the one-two punch of Covid and Hurricane Ida, Leslie guides with the exclusive focus of preserving our Jewish mission and making the J a welcoming place for all generations to learn, play and enjoy.”