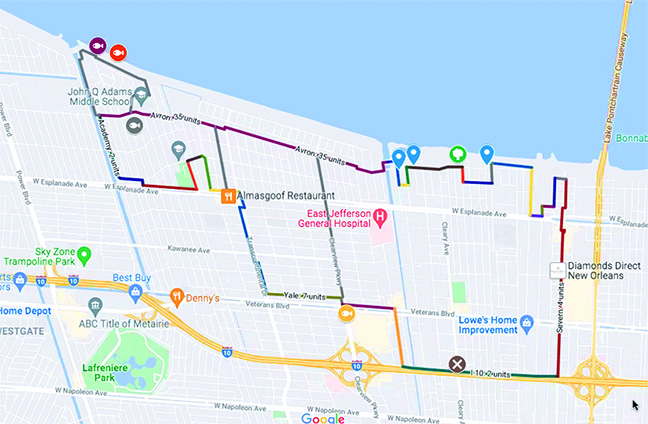 The completion of the New Orleans eruv last July was a mixed blessing for Shabbat-observant families in the area.

Because one may not carry items outside of their private domains into public areas, such as streets and sidewalks, on Shabbat, an eruv makes a wall around a neighborhood to make it one large private space, enabling one to carry things, push baby strollers and so forth.

The long-awaited eruv encircling Uptown was approved last July — but an examination done at the same time showed that the 10-year-old eruv in Metairie encircling the Jewish institutions along West Esplanade and the surrounding neighborhoods was no longer kosher.

Figuring out what to do about it and making the necessary repairs would take until early February, at which time the Metairie eruv was deemed kosher again.

In a webinar on Feb. 3, Rabbi Stephen Belsky explained what happened, and the lengthy process needed to reestablish the eruv.

To turn a neighborhood of private homes into one large private space, Belsky explained, it is necessary to turn it into “one big happy family with a shared courtyard” by putting some kind of fence or wall around it.

Much of the Metairie eruv had used levees as a wall, especially on the lakeside boundary, because “the levee is literally a wall.”

Rabbi Josh Pernick of Beth Israel said reconfiguring the eruv “has been an extended process.”

Fortunately for the city, but unfortunately for the eruv, there has been recent work to shore up the levees. Now, the slope of the levees is too shallow to serve as a wall, because “it has to have a minimum slope or steepness, and it doesn’t have that.” An entirely new route had to be established for the northern boundary.

Metairie has a lot of existing infrastructure to use as an eruv, Belsky said, from fences around individual homes to the wall along Interstate 10. Where there isn’t such a structure, “other structures can be walls if you look at them in the right way.”

But when the wires aren’t directly over, “then we have to do work.” If the wire runs along the side of the pole, a grey conduit — basically a PVC pipe —  is attached to the pole, directly underneath the wire. About 150 30-foot conduits were used in the project.

Naturally, all this requires coordination — and permission — from utility companies.

Belsky said that when power lines are installed, it isn’t done with an eye on making things easy to establish an eruv. In cases where lines are held a few feet to the side of a pole, the grey conduits have to be bent so they met up directly underneath the wire.

That was another issue with the Metairie eruv. Because of soil settling, many utility poles lean over time, and that has led to many spots of the old eruv being out of alignment between the wire and the conduits.

“West Esplanade is pretty complicated because utility poles lean over to an unfortunate degree,” he said, too far over to serve as a vertical structure for an eruv.

In areas where there are no power lines to use, “we have to use our own wire,” Belsky said. With the assistance of Entergy, they went around putting up string attached to the top of conduits. Even fishing line is acceptable, Belsky said. Much of the eruv near Girard Playground uses this method.

Belsky said the northeastern section was one of the most complicated to do, and there is a lot of zig-zagging because the utility lines run north and south, and there isn’t east-west infrastructure to parallel the lake. At first, they weren’t sure they could come up with a solution that would include Shir Chadash and the Goldring/Woldenberg Jewish Community Campus.

Because of various issues, there are a few Shabbat-observant households next to but not inside the eruv. In some cases, one side of a street is within the eruv while the other side is out.

Permission was needed not just from utility companies. When a household fence was being used, or if a new wire had to be strung along someone’s property, they needed to ask the homeowners for permission. Most were fine with it, but not everyone.

Pernick said they tried to minimize the number of people they asked for permission. He noted that Entergy was very supportive, as was Jefferson Parish Councilwoman Jennifer Van Vrancken, who “understands eruv and wants there to be an eruv here.”

Pernick said “Mikvah and eruv are two core infrastructures for Jewish communities to function,” so when it was determined that repairs were needed for the eruv, Beth Israel decided that it would front the expense of the repairs. “We wanted to move this project forward without delaying for reasons like that,” he said.

Beth Israel President Harold Pesses said “we consider this to be the Metairie community eruv… It’s not just a Beth Israel project.”

The project cost about $20,000 in materials, labor, truck and lift rental, and the installation is a two-person job. A fundraising campaign is underway, and Pernick said they would like to see households in the eruv contribute a minimum of $180, though “every bit helps.”

The Atlanta eruv was deemed kosher on Feb. 4, with a ceremony at the junction in front of Pig-N-Chik BBQ.

In addition to the fundraising, Beth Israel is coordinating volunteers to check the eruv for gaps or breaks before each Shabbat and holiday.

The bottom line is that Metairie “is a place where you can live as an observant family,” Pernick said.