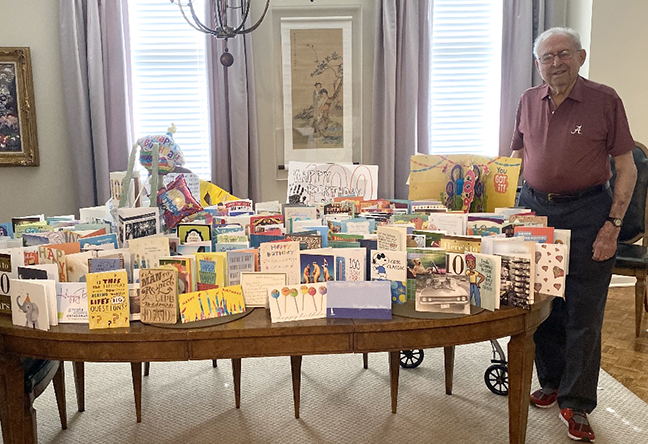 Visiting Leonard Held a few days after his recent 100th birthday, the first thing this long-time Birminghamian does is take you into the dining room. There on a long table are nearly 200 birthday cards, neatly arrayed, creating a tapestry of Leonard’s long life.

His deep voice, flavored by an unmistakable small town Alabama accent, fills the room as his eyes grow moist: “This is what it’s about. Friends and family.” Fifteen more cards would arrive that day. 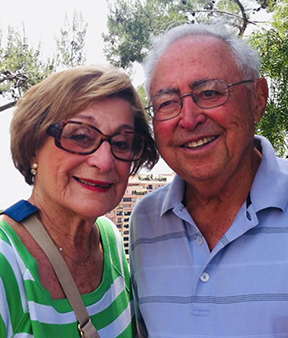 Yet for the Held family — Leonard, his late wife Cissy, their four children, eight grandchildren and 14 (and counting) great-grandchildren — that dining room table tells an additional story; a powerful saga that has spanned the decades and bound their family together for generations.

It is a story of how Judaism, when lived and celebrated together, can create unbreakable bonds among family members that can withstand conflict, provide comfort in times of distress and deepen love and loyalty to one another. This is what Leonard and Cissy, though from vastly different backgrounds, understood as a young married couple, as they built a family that has had a significant impact on the Birmingham Jewish community and beyond.

In a weekly ritual as reliable as the sun rising, the family would gather every Friday night at Leonard and Cissy’s Mountain Brook home for Shabbat dinner. Cissy would light the candles as the smell of chicken or brisket wafted through the house. Two, then three and ultimately four generations of Held family members would delight in being with one another.

Those Shabbat dinners even made their way into granddaughter Jill Graham’s college application essay. Jill, now 45 and living in Austin, Texas, remembers the question: “If you were entertaining an out-of-town visitor, where would you take them?” The answer was easy: To her grandparents’ house for Shabbat dinner, for evenings marked by lively discussions and laughs.

It was there that, while growing up, she and her cousins could delight in being young children, hiding under that table playing games. It was also there that those in Jill’s generation could grow confidently into adulthood, nurtured by doting grandparents.

Jill remembers that even as she became a teenager and began going out with friends on Friday nights, she would still come to Shabbat dinner first, bringing her friends if she wanted to, and then go out afterwards.

Added Layne Held, 37, one of three of Leonard and Cissy’s grandchildren who live in Birmingham, “I look back at my childhood especially as it relates to my Jewish life – and having that continued ritual of Shabbat dinner at Mimi and Papa’s (Cissy and Leonard’s) and how important it was to be together.”

Interviewed as he was about to become a father for the first time, Layne was asked how those weekly experiences at his grandparents’ home would influence him as a dad. “I find it hard to believe that Shabbat dinner won’t be an important part of our family’s weekly traditions — it will be a nice way to be together; to not have any other obligations and to celebrate an important part of being Jewish.”

These table matters are reflections of a life well-lived that began for Leonard on Friday, September 8, 1922 — 100 years ago —in the small town of Talladega, where there were few Jews, but economic opportunities for his family and the other Jewish families who lived there.

On the day Leonard was born, Warren G. Harding was president. The world would also witness Benito Mussolini’s rise to power that year and the creation of the Soviet Union, events that would turn out to be of great significance.

Though there were few Jews in Talladega, which is over 50 miles from Birmingham, Leonard had a Jewish upbringing. He remembers being confirmed at the age of 16 at the temple in nearby Anniston by Birmingham Rabbi Morris Newfield, who drove two hours on a stormy Sunday to confirm Leonard and four other young men.

Growing up in a small Southern town in the 1920s and 1930s, Leonard experienced no antisemitism despite what stereotypes might suggest. He remembers one friend referring to him as “Jewboy,” though Leonard didn’t think it was intended as an insult. His family was in the clothing business and doing well, with his father, Harry “Happy” Held, becoming an influential figure in Talladega.

Though he didn’t encounter antisemitism directly, Leonard remembers an incident involving his dad. One Saturday night after their store had closed for the evening, the elder Held went to the local pool hall where the men in the town gathered to enjoy drinks and hang out. Someone made an antisemitic remark, which infuriated Happy. He let the man know, and there never was another incident.

Leonard and Cissy were an unlikely match that was meant to be. Cissy, a matriarch of the Birmingham Jewish community, died earlier this year at age 93. A 2009 video of the two of them reflecting on their 60th anniversary seems at times like a couple’s outtake from the movie “When Harry Met Sally.” They tell the same stories but usually with a different twist, seem to finish each other’s thoughts and reflect the love and bonds that spring from a successful 73-year marriage.

What made the match unlikely was that Cissy grew up in a heavily Jewish neighborhood in Cincinnati, where she often was the belle of the ball — a charismatic leader, a good student and a great athlete with a wave of Jewish friends and suitors. Leonard was the proverbial country boy. Yet on a deeper level they couldn’t have been more alike. Family, a zest for life, a belief that Jews must take care of one another, and a determination to live each day to its fullest were bedrock values they shared.

Leonard, who had just been discharged from his World War II army service, met Cissy at a dinner party in Birmingham when he was 24 and she was 19. Cissy would visit Alabama each summer because she had close relatives in Birmingham. He took one look at Cissy in her off-the-shoulder yellow dress and decided this pretty, outgoing Ohio girl was the one for him. He sat next to her at dinner — and over the course of the evening told her that he was going to marry her. She laughed. He persisted, traveling to Cincinnati to woo her and impress her family. He would prevail and they would settle in Birmingham.

Along with raising four children — Julie Gilbert of Houston and Randy Held of Los Angeles, in addition to Jerry Held and Karen Allen of Birmingham — Cissy’s passion was the Jewish community and volunteer work, which she pursued with vigor and purpose, always with Leonard’s support. On a Zoom with the four siblings shortly after Leonard’s birthday celebration, each talked about the emphasis their parents put on Judaism and the pride and passion they instilled in them for being Jewish.

As Jerry and Karen began building their adult lives in Birmingham, they embraced this legacy early on and have had a major impact on the Jewish community. They have served as presidents of four local Jewish agencies and been volunteer leaders for organizations almost too numerous to count. Karen also has lent her talents to the Jewish community professionally, as associate executive director of the Birmingham Jewish Federation, where she worked for almost 22 years, and as a travel advisor, helping to coordinate trips to Israel, including successful interfaith trips.

Leonard and Cissy’s grandchildren, those who live in Birmingham and elsewhere, also are involved in Jewish life with some of them already, at a relatively young age, having ascended to major leadership roles.

As he savors his 100th birthday, Leonard also is worried. He has seen a lot in his lifetime — the stock market crashed when he was seven; as a boy and then a young teen, he lived through the Depression; as a young man, he was called to serve in World War II; in the aftermath of the war, he endured the pain of knowing that Adolf Hitler had succeeded in killing 6 million of his fellow Jews; and as a Jew living in Birmingham in the 1950s and 1960s, he was well-attuned to the challenges the Jewish community faced during Birmingham’s turbulent and at times violent Civil Rights era.

Today he worries about the growth of antisemitism and is concerned about the political and cultural divide in our country. Nonetheless, having lived a life that spans 100 years, he knows the pendulum of history swings, and hopes that America will continue to provide his children, grandchildren and their children with opportunities to achieve happiness and prosperity.

As he relaxes in his easy chair, wearing an Alabama Crimson Tide golf shirt and surrounded by colorful family photos, Leonard knows life has been good to him. His memory remains sharp, he has thoughtful well-expressed opinions and his enthusiasm for life endures. His inner thoughts? They were reflected in a toast he gave during his birthday festivities.

“He talked about the importance of family, friends and forgiveness,” said granddaughter Jill. “If you get in a fight with someone, you must move past it. It was interesting to me that at 100-years-old, this was on his mind. Papa wants to be sure that everything he and Mimi built and worked for will endure.”