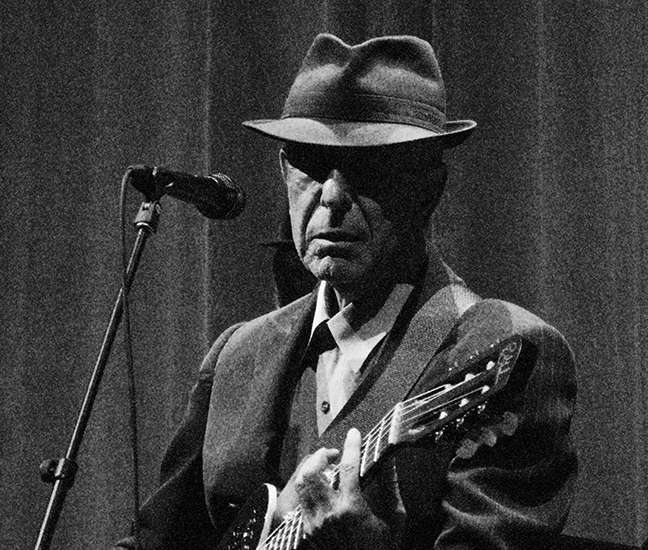 When the only Leonard Cohen tribute “cover” band in the United States made its live debut at Workplay in Birmingham in 2019, fans of the great Jewish poet, singer and songwriter greeted it with a resounding chorus of Hallelujah.

“After word spread about the first show, we had people from all over the world wanting us to perform,” said Birmingham musician David Stegall. “There are so many people who love Leonard Cohen and his words have touched so many people.”

The pandemic halted progress, but Workplay will host the revival when Stegall, musical partner Reid Brooks and The Famous Blue Raincoats perform “The Music and History of Leonard Cohen,” Nov. 11 at Workplay. Doors open at 7 p.m. for the 8 p.m. show.

“He was a remarkable artist and person — a true poet whose work explored love, religion, politics. Leonard Cohen had such an interesting life. I’ve read his books and listened to all of his 250-something songs. He was quite an influence on me and my music.”

Stegall refers to “The Music and History of Leonard Cohen” as “sort of a live rockumentary.

“We only knew of a few Leonard Cohen cover bands in Canada and Europe. His music tells so many stories, but we knew we needed to do a show that was also filled with narrative about him and his amazing life.”

A musical innovator, most of Cohen’s recordings were folk songs. But he would incorporate some spoken word, blending in jazz as well as even Asian and Mediterranean influences. He released a few albums in the late 1960s and through the 1970s.

Perhaps Cohen’s most famous song, “Hallelujah,” was first released on his studio album “Various Positions” in 1984. Later in the decade, he experimented with synthesized productions — a departure from his minimalist style. “I’m Your Man,” released in 1988, remains his most popular album.

His 1992 album, “The Future,” included dark lyrics and references to political and social unrest. Cohen took a 10-year hiatus, then returned to music in 2001 with an album that was a major hit in Canada and Europe.

Stegall, 66, is an insurance salesman by day and musician by night. He had mostly played folk music on guitar and didn’t start singing until a year or so ago.

Stegall and Brooks played together in a band starting around 2017, performing mostly folk cover songs, including a few of Cohen’s. They started talking about the Leonard Cohen tribute in 2018.

Stegall and Reid assembled a group of professional musicians to back them up – The Famous Blue Raincoats (named for a popular Leonard Cohen song). The deep-voiced Stegall handles the lead vocals and Brooks does the narratives.

He said they have brought in a few new musicians to be a part of The Famous Blue Raincoats and tweaked the show slightly, but it will be mostly similar to the 2019 Birmingham show.

“We would love to grow this and to be able to ‘take this show on the road’,” said Stegall, noting that he and most of the other musicians also have day jobs. “I hope we can carry on his legacy to let current and future generations appreciate the gifts he gave to all of us.”