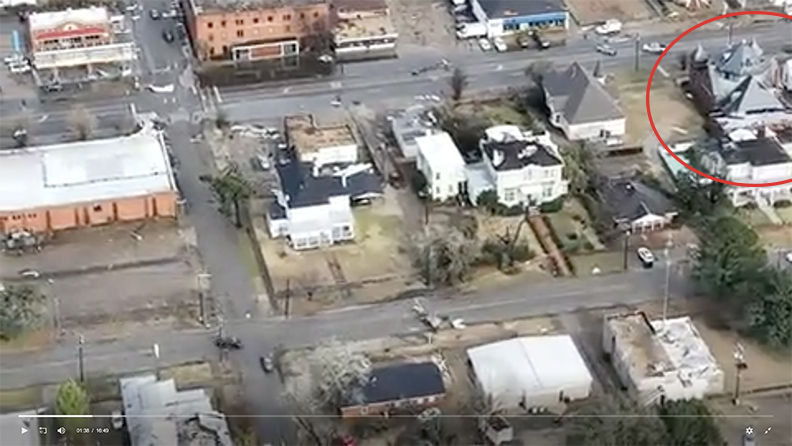 Screenshot of drone footage of downtown Selma after a large, long-track tornado tore through the city on Jan. 12. Mishkan Israel, the city’s lone synagogue, is in the upper right corner. Footage courtesy Rex Jones of Cougar Oil.

Mishkan Israel, the historic synagogue in downtown Selma, is still standing following a devastating tornado that swept through the city that is known as a civil rights battleground of the 1960s.

According to Ronnie Leet, who is one of the community’s three remaining members and coordinates activities at the synagogue, the building has some roof damage, and one of the upper windows — not one of the stained glass windows — was blown out. A company will be inspecting the damage on Jan. 16, after which there will be definitive answers on what is needed to repair the damage. He added, “hopefully we can get some tarps on it before the next rain,” which is expected on Jan. 17. 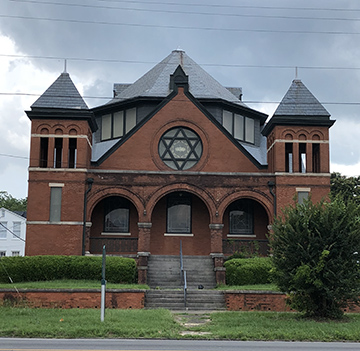 The roof has long been a priority in the campaign to preserve the building, which was dedicated in February 1900. The congregation was established in 1870.

The tornado struck just after noon and was part of a line of strong storms passing through the region. While the spring is generally considered to be prime season for tornadoes, January storms are not unusual.

The National Weather Service in Birmingham says the tornado was likely at least an EF2. The same cell passed Prattville, about 40 miles away, and held together well into Georgia.

The tornado’s path was along West Dallas Avenue, causing a lot of damage to the Selma Country Club, then along J.L. Chestnut Boulevard along the train tracks toward Broad Street, about half a mile north of the Alabama River and the Edmund Pettus Bridge.

Leet said the Old Town Historic District, which is right behind Mishkan Israel, “is devastated.” Sturdivant Hall Museum, about four blocks west, survived but had windows blown out and many trees toppled.

Doug Buster, head of Selma’s Cemetery Preservation Group, told the Selma Times-Journal that “Old Live Oak Cemetery has some large trees down, but is moderate compared to New Live Oak, where there is heavy damage.”

Live Oak, where the Jewish cemeteries are, is next to Old Live Oak, while New Live Oak is about half a mile to the west. Buster said over half of the trees at New Live Oak are down, with likely monument damage underneath.

On Jan. 13, Governor Kay Ivey toured the damage, declared a state of emergency in six affected counties, and said that President Joe Biden will “expedite” a major disaster declaration. While damage assessments are still underway, hundreds of buildings were affected. There were no fatalities.

Brown Chapel A.M.E. Church, a major focal point of the 1965 civil rights demonstrations, was spared, and historic sites by the river escaped damage.

While Selma is known as a major historic site in the civil rights movement, and thousands flock there annually in March for a march across the bridge, the city has struggled economically for decades. The city currently has about 17,600 residents.

With Selma’s Jewish community down to just a handful, efforts have been made in recent years to keep the building going as a magnet for Jewish civil rights tours from across the country, and for local events. Six years ago, an Orthodox congregation from the Washington area held a Shabbaton there over King Weekend.

In 2015, for the 50th anniversary of the bridge crossing, Mishkan Israel hosted a major event about Jewish involvement in the civil rights movement. Susannah Heschel spoke about her father’s friendship with Martin Luther King, and how Rabbi Abraham Joshua Heschel marched with King in Selma. Other guests included Peter Yarrow of Peter, Paul & Mary, who performed in concert for the marchers in 1965 near Montgomery, and Clarence Jones, King’s advisor and draft speechwriter.

When it comes to tornadoes, initial damage impressions can be deceiving. On Dec. 25, 2012, a tornado went through Mobile, damaging Springhill Avenue Temple. Windows were blown out and a flying beam punctured the roof. However, the biggest damage was not initially apparent — the tornado had lifted the roof off the building by about an inch, displacing it and leading to an extensive repair process.