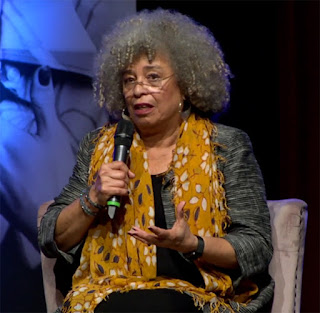 After a month and a half of controversy, Angela Davis spoke in Birmingham on Feb. 16, though in a much larger venue than originally planned.

Her appearance was the culmination of a long saga of twists and turns, after the Birmingham Civil Rights Institute announced last fall she would be this year’s recipient of the Fred Shuttlesworth Award. After concern was expressed about Davis’ views that are seen as radical on several issues, including the Middle East, the Institute announced on Jan. 4 that the event would be cancelled, leading to an outcry among those for whom Davis is a civil rights folk hero — or, as the term was commonly used, a “shero.”

A multi-generational group, the Birmingham Committee for Truth and Reconciliation, was formed and invited Davis to come to Birmingham on Feb. 16, the day when the original ceremony had been planned, and address a free community event.

Not a clash of cultures: Birmingham mayor clarifies remarks about Davis controversy’s origins

The program was originally planned for the Lyric Theatre, but sold out almost immediately. Organizers then moved it to the 6,000-seat Boutwell Auditorium, and according to the website, it was listed as sold out a day after the tickets were made available. Though there were boasts of a full house, seating on the main floor was about two-thirds full and the fixed stands had just a few hundred seats filled, with a crowd estimated at around 2,000.

After the initial controversy, the Institute reinstated the award, but Davis said she was going to defer to the local activists as to whether she should accept.

The Institute was silent about the reasons behind their cancellation, aside from a basic statement that a “closer examination” of her public record showed “she unfortunately does not meet all of the criteria on which the award is based.”

That silence led to speculation about the reasons, and though the concern had been expressed from numerous segments of the community regarding numerous topics, a narrative emerged that the pressure came from the Jewish community and its allies because of Davis’ outspoken support of the Palestinians and extreme anti-Israel rhetoric.

In one sense, Davis reinforced that narrative in her remarks, but also cautioned not to “generalize” about the Jewish community, in particular praising Jewish Voice for Peace for its support of her and her views.

Jewish Voice for Peace, a far-left anti-Israel fringe group, works with pro-Palestinian groups on efforts to boycott Israel and isolate the Jewish state.

The event’s format was “a conversation with Angela Davis,” with Imani Perry, the Hughes Rogers Professor of African American Studies at Princeton University, sitting down with Davis to discuss her ideas and recollections. Like Davis, Perry is a native of Birmingham.

Perry said that when the Institute rescinded the award, “the people of Birmingham immediately responded” to put together an alternate event.

Looking at the cheering crowd, Davis replied “I have never loved Birmingham as much as I love Birmingham tonight.”

Davis said the evening “almost feels as if we are marking a new beginning.” She had been “overcome with joy” upon hearing that she was named for the Shuttlesworth award.

“Reverend Shuttlesworth has always been one of my heroes, and I have always admired those, especially Odessa Woolfolk, who had the vision that led to the creation of the BCRI,” she said. Despite the controversy, “I don’t want to do anything that can damage the future of this very important institution.”

However, she continued, “I was surprised to hear that later they decided to rescind the award, and then when I discovered it might have something to do with my involvement over many years in efforts to advocate for justice for Palestine, it became clear to me that this might actually be a teachable moment.”

Davis said “We might seize this moment to reflect on what it means to live on this planet in the 21st century, and our responsibilities to people not just in our community, but all over the planet, and of course in occupied Palestine.”

She added, “Black people especially owe a great deal to Palestinians, who have been struggling for decades and decades and refuse to give up. They are an inspiration to people who are fighting for freedom everywhere.”

Later in her presentation, Davis said Palestinians were the first to offer solidarity to the uprising in Ferguson, Mo., after the shooting of Michael Brown, a black teen, by a white police officer in 2014. “Let’s not forget that.”

Davis said Ferguson exposed “the militarization of the police,” and in the process “we learned that the small police force in Ferguson had been in part trained by the Israeli army… that means if we want to struggle against racism, we have to be aware of the international reverberations, international connections and intersections.”

Perry noted there is a “misperception… that solidarity with the Palestinian people does not mean one is anti-Semitic or one does not also have solidarity with Jewish people,” and she mentioned a National Solidarity Shabbat held the previous evening in Davis’ honor.

The Shabbat was organized by JVP chapters around the country. A graphic was circulated for the Shabbat events, “Angela, You Are Welcome at this Shabbat,” echoing signs that were displayed nationwide in the 1970s when she was on the run as an FBI Ten Most Wanted fugitive, “Angela, Sister, You Are Welcome in This House.”

For use at the events, JVP also distributed “The Torah of Angela Davis,” which stated “From Alabama to the Allenby Bridge; We choose solidarity, won’t let them drive a wedge; We’re Jews for Black liberation and a free Palestine; Because we know our struggles must be intertwined.”

The Allenby Bridge crosses the Jordan River near Jericho and is the main entry and exit point for Palestinians traveling from the West Bank to places outside of Israel.

One of the Shabbat gatherings was in Birmingham, hosted by Jesse Schaffer. Schaffer told Democracy Now! that Davis is an expression of how “our historic struggles are linked, whether it’s Palestinians, it’s black folks in the South, Jewish folks—really, any struggle for justice—that they’re all linked and that we’re stronger together.”

Phyllis Mark told Democracy Now! she was “heartbroken” and “angry” by the controversy, and “as a Jew, it’s a deep, deep embarrassment and shame that I feel, that we would become an oppressor,” of Palestinians, “even though we see ourselves as an oppressed people.”

Margaret Weinberg added that she never equated Palestinian solidarity with anti-Semitism, and “the important part now is that there have been so many fruitful conversations that have come out of this in Birmingham amongst different groups of people, and that’s been—that seems to be a really powerful thing.”

Davis said JVP “has done an incredible job, not only in this particular moment but in general, creating a very powerful movement among Jewish people.”

JVP also had placed a full-page ad in the Birmingham News that Friday, saluting Davis.

Recently, Davis has been one of the main faces for JVP’s “I Stand With Ilhan” campaign, as U.S. Rep. Ilhan Omar from Minnesota has been widely condemned for repeatedly using anti-Semitic tropes in discussing American support for Israel.

Davis said the Shabbat “made me feel really humble… I don’t really think of myself as being special,” and that a lot of work done by organizations gets projected onto individuals. “I am simply standing in for the work that was done by vast numbers of people, thousands and millions of people.” Praise of individuals is part of the problem of a capitalist society, and the only reason people know her name is because of the activists around the world who organized on her behalf when she was on the run in the 1970s.

One supporter in a JVP shirt was at the event. Rachel Rubin of Chicago said she came down “to celebrate Angela” and her support “for Palestinian rights, but also her lifelong leadership in the struggle against oppression and for human rights.”

IfNotNow’s New Orleans chapter had previously announced it would attend the event, but cancelled their trip. Referring to itself as “the Jewish future and the moral leaders that the Jewish community needs right now,” IfNotNow said it was “joining in the struggle against white-nationalism and not allowing the Jewish Establishment or Christian so-called ‘allies’ to define our tradition.”

At a press conference earlier in the day, Davis was asked about the award being rescinded, and she said the only explanation the Institute gave her was because of statements she had made that were part of the public record. “I was at a loss,” and “should have thought” that it had something to do with her statements on Palestine.

After the decision was publicized, “I heard from people all over the world, including huge numbers of Jewish organizations,” she said. “On the one hand, I am very sorry events unfolded the way they did… but on the other hand it provided an occasion” to discuss social justice in the 21st century.

She added that in her entire history of working with multiracial organizations, a disproportionate number of the white people have been Jews.

She is also an alumna of Brandeis University, where she gave an address the week before. “I learned about Palestine at a Jewish university,” she commented.

Davis was also asked how international awareness will affect the next election and “the U.S. policy toward blind unwillingness to criticize Israel and treatment of the Palestinians.”

She replied that it was part of a “much broader question” of “the indivisibility of justice.” She added, “when we create social justice agendas, we can’t create this exception where we call for justice for everyone except for Palestinians.”

She was then asked about how “women of color” are now being targeted for their support of Palestine. Davis reminded her that Marc Lamont Hill was also targeted.

Davis said a decade ago, while there was “a vibrant movement for Palestine, against the occupation,” it “was not included on most social justice agendas. It was a marginal issue.” There was a push to get it on social justice agendas just as anti-apartheid activism was widespread against South Africa in the 1980s.

She credits the rise of Students for Justice in Palestine, JVP and Jews for Racial and Economic Equality for making the issue more prominent, along with its inclusion in the Black Lives Matter agenda.

“How can a nation state present itself as not subject to criticism?” she asked. “Can you name another state in the world? The equation of criticism of the policies and practices of the state of Israel with anti-Semitism is outright wrong.”

At Boutwell, Davis also spoke of her growing up in Birmingham, how she became an activist, and her work to dismantle the current system of incarceration and policing, which she said is structurally racist.

Perry asked Davis who she considers to be “her people.”

“My people are all those who are struggling for justice and freedom in the world,” she said, citing indigenous people in the U.S., refugees who have nowhere else to turn, the Palestinians, the Rohingya in Myanmar, Kurdish women who are “standing up for revolution” and women’s equality, trans activists, the LGBTQ community “and all of those who want to bring the system of capitalism to its knees.”

Earlier in the day, she led a closed workshop, “Power to the People: Activism and Justice,” which was attended by over 100 local activists. The evening program concluded with the presentation of a special artwork to Davis by the Birmingham Committee for Truth and Reconciliation, with former Mayor Richard Arrington leading the presentation, along with many of the committee’s other activists from across generations.

Arrington said the “powerful” evening “began with a misunderstanding or a difference of opinion that sent shockwaves throughout our community and did not represent what we stand for and believe.”