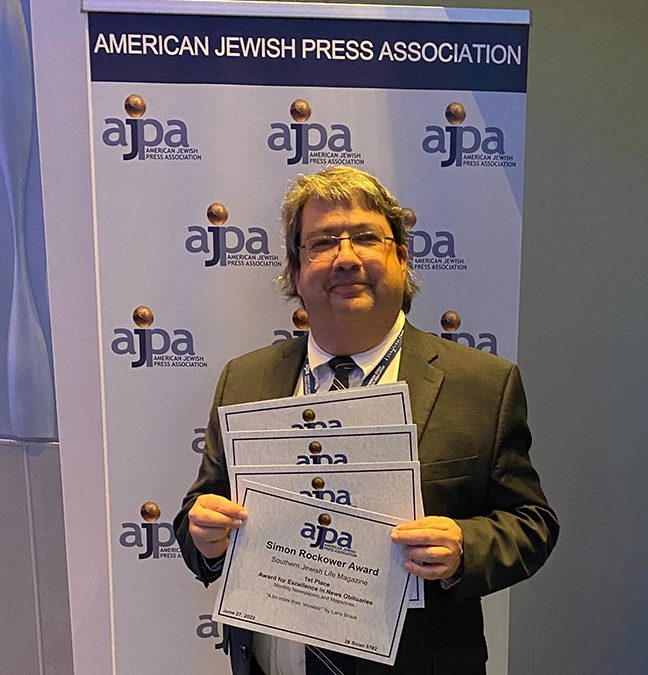 The regional publication with offices in Birmingham and New Orleans received four awards in what is regarded as the “Jewish Pulitzers.” The Rockowers were presented on June 27 at the American Jewish Press Association annual convention in Atlanta, and this year the Rockowers set a new record for most entries.

Southern Jewish Life received first place in news obituaries for “A Bit More Than ‘Showbiz’,” the obituary of controversial Pensacola trial lawyer Fred Levin, who was best known for taking down Big Tobacco. Second place in Writing About Antisemitism was for “More Education, More Antisemitism,” about an Arkansas study that used a different survey method to show that those with graduate degrees were more likely to harbor anti-Jewish bias than those with less education. (Note: Linked online headlines are not the same as the submitted print versions)

Southern Jewish Life received honorable mention for News and Feature Reporting on the Arts for “Entering the world of demons in Jewish folklore,” about the Jewish horror film “The Vigil” and its star, Dave Davis of New Orleans.

The other Rockower was honorable mention in photography, for a cover photo of a couple kneeling in prayer next to the Holocaust memorial at the Riverwalk in New Orleans.

All four pieces were by Editor/Publisher Larry Brook.

As a magazine, Southern Jewish Life competes in the category with monthly newspapers and magazines, many of which are national in scope, such as Moment, Hadassah, Lilith and the Orthodox Union’s Jewish Action. This brings Southern Jewish Life’s cumulative total to 22 Rockowers.

Next year’s convention and Rockowers presentation will be held in New Orleans, co-hosted by Southern Jewish Life and Crescent City Jewish News, whose publisher, Alan Smason, is the current president of AJPA.